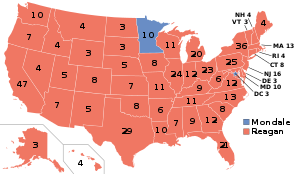 So I guess it really is morning again in America!

The 1984 U.S. presidential election was the second of the two that the Gipper won. This time, with the incumbency advantage on his side, he easily crushed his Democrat opponent Walter Mondale in a historic, 49-state landslide. By the standard definition of landslides, where the winner has a ten point or more lead in the popular vote, this was the last landslide election ever! Mondale only won the District of Columbia (very much a gimme for Democrats since the first time people there were allowed to vote in presidential elections) and narrowly carried his home state, Minnesota. Reagan's easy victory speaks to the ability of charisma to overcome serious obstacles in American politics--an ability which was greatly amplified by television and his acting prowess. Mondale's campaign also showcased many potential ways for a candidate to shoot themselves in the foot, like proudly pledging to raise taxes.[1]

This article is a stub.
You can help RationalWiki by expanding it.
Retrieved from "https://rationalwiki.org/w/index.php?title=1984_U.S._presidential_election&oldid=2305771"
Category:
Hidden category: