The Republican race to choose a candidate to challenge President Barack Obama clearly, firmly, and irrevocably proved, for everyone to see, that the Republicans are utterly batshit insane and need to be put down.

This was largely a clown show, with Mitt Romney, former 2008 candidate, as the frontrunner, and everyone else rising as alternatives shortly before crashing utterly. The race for all intents and purposes ended on April 10, 2012 when Rick Santorum suspended his campaign, finally making Mitt Romney the presumptive Republican presidential candidate.

Candidates who officially declared their candidacy or formed exploratory committees, but had an effectively zero chance of winning.

The rest of the field; a bunch of long-shots who officially declared their candidacies but lacked both the resources and the media attention to be effective contenders.

Candidates who dropped out. 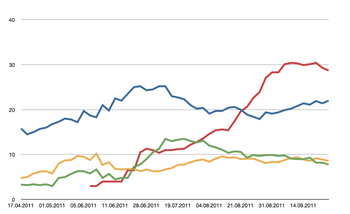 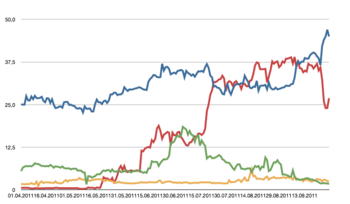 Shown at the right is a moving average of recent primary polls, obtained from RCP's polling database.[8] For several reasons, these numbers should be taken with a huge grain of salt:

An alternative measure for predicting the candidates' chances of winning the nomination is having a look at the odds they're given at betting markets. Intrade allows bettors to take out long and short positions on contracts that trade between zero and 100 points, with each contract assigned to an event that can happen or not — in this case, a given candidate becoming the Republican nominee. As soon as the outcome is clear, contracts expire at either maximum or minimum value. In the meantime, they can be freely traded, and the current point value can be read as the market's overall consensus about a candidate's chances expressed in percentage points.