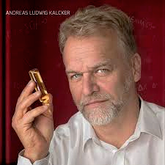 "Dr" Andreas Kalcker. He doesn't always drink bleach, but when he does he prefers MMS bleach.

"Dr." Andreas Ludwig Kalcker is a ruggedly-handsome polyglot with a cool set of wheels -- but there are far more important reasons to dislike him.

He promotes the intake of so-called MMS chlorine-dioxide cure-all (an industrial bleach) to be administered orally and/or rectally as a treatment for a wide range of serious and life-threatening medical conditions, including autism, cancer, malaria, COVID-19 and HIV/AIDS.

Not a medical doctor,[2][3][4] Kalcker also illustrates the use of corrosive "black salve" on his website as a way to treat skin disease, a strategy which is known to be an effective way to remove minor nasal skin conditions cut off your nose to spite your face get rid of your nose.

He also promotes the HHO water-powered engine concept with his big silver recreational-vehicle[5] that allegedly obtains most (but importantly not all) of its power from water. The monster vehicle is used to simultaneously promote impossible water-powered engines and the chlorine-dioxide panacea.

Given his interest in subjects as diverse as industrial chemicals which allegedly cure many human ills and engines which allegedly run on water, "Dr." Andreas Ludwig Kalcker is either a scam artist with an unusually broad repertoire or a prime example of crank magnetism.