From RationalWiki
(Redirected from Bahaism)
Jump to navigation Jump to search
Not to be confused with Ba'ha.[note 1]

The Bahá'í religion is a medium-sized, but global, religion founded by Baha'u'llah,[1] a nineteenth-century Persian exiled to the Ottoman Empire. Though emerging from Islam, the religion regards most of the major faiths as paths to God (Sikhism and Taoism are not so honored), and therefore sees religious wars as bad. Each legitimate religion (according to Bahá'í doctrine) has been founded by a prophet — the list of prophets includes Abraham, Krishna, Zoroaster, Moses, Buddha, Jesus, and Muhammad — with each new prophet superseding his predecessors, in a process that Baha'is expect to continue into the indefinite future.[2] 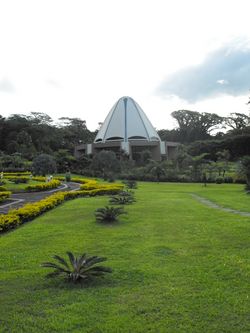 Baha'is got stuck with a particular, and by now dated, transliteration scheme chosen by the great-grandson of their founder, who was the first in his family to attend college, and fancied himself something of an Orientalist. "Bahá'í" (note the diacriticals) — or better yet, "the Bahá'í Faith" — is the preferred renditon of the name of the religion. Since outsiders can rarely be bothered with the diacriticals, the use of the Baha'i "house style" (whether for this, or for other Arabic / Persian words) is a reliable sign that a text was authored by Baha'is. "The Baha'i religion" comes across as fairly neutral and academic, while "Bahaism" is a sign that the writer is either a crazed conspiracy theorist, or Denis MacEion.

Among the voluminous writings of Baha'u'llah (and the Bab), a number have been selected for official translation and dissemination, while others remain inaccessible in the Baha'i archives, possibly because they contain material which is now regarded as embarrassing. The major sacred text of the Baha'i religion is said to be the Kitab-i-Aqdas (glossed as "the Most Holy Book," literally "the Greatest Book"), an Arabic-language text composed by Baha'u'llah in the early 1870s. It is a very unsystematic description of Baha'i laws, in much the same spirit that has given us Islamic sharia or fiqh (jurisprudence). Non-Middle Easterners tend not to admire many of its provisions, such as the rule that arsonists are to be punished by being set afire,[note 3] which may explain why the Baha'is waited until 1992 to translate the work into English. (An "unauthorized," but broadly accurate, translation by a missionary was generally regarded as an attempt to embarrass the faith.) Par. 49 states that "God hath imposed a fine on every adulterer and adulteress, to be paid to the House of Justice: nine mithqáls of gold, to be doubled if they should repeat the offence." Baha'u'llah seems not to have understood the principle of geometric progression; one enthusiastic couple could, in a month's time, find themselves liable for more gold than is known to exist in the solar system.

Baha'is predict the emergence of world unity, including a world government, which they believe has been willed by God. This carries a strong anti-racism component, and indeed, the Baha'is are consciously and proudly multi-ethnic. Whether their institutions are to become the future world government, or remain separate from it, is a point of some disagreement among Baha'i writers and authorities. Likewise uncertain is the timing of this world unity, although some older books suggest that it will occur during the 20th century. (Obviously, these misinterpreted the authoritative utterances of Baha'u'llah's son Abdu'l-Baha.)

Another tenet of the Bahai faith is the unity of science and religion, which, as in Catholic theology, are broadly held to comprise separate magisteria. Minor conflicts do arise when one or another authoritative figure makes statements at odds with the scientific mainstream, as when Abdu'l-Baha denies that humans evolved from (other) animals, or when Shoghi Effendi says that homosexuality can be cured through prayer. More generally, the Baha'i religion regularly comes into conflict with secular scholarship on their sacred history, whose conclusions often depart from hagiographic official treatments. Baha'i encyclicals condemn such scholarship, uninformed by religious faith, as "dogmatic materialism."

Much as Islam sees itself as the most recent and ultimate of a series of divine revelations that includes those that originated as Judaism and Christianity, so too Baha'is believe that their faith is a natural successor of other religions.[note 4] The observation that other religions have also adapted to the times, just as theirs has, confuses them, since they are taught that other world religions represent corruptions of the pure, pristine teachings of their supposed founders. Nevertheless, Baha'is are active in interfaith events, partly for PR reasons but also out of genuine belief that such forums have some effect on the world.

The highest such council, and supreme governing body of the Bahá'í Faith, is the Universal House of Justice, founded 1963 (after earlier leader Shoghi Effendi died without children or a will), and headquartered in Haifa, Israel. In accordance with the Bahá'í teaching of the equality of men and women, only men are eligible to be elected to the nine-member body. (ʻAbdu'l-Bahá promises that the reason for this will "presently be made manifest even as the mid-day sun.") Although the UHJ is elected (by national delegates) every five years, a ban on campaigning — coupled with a tendency of Baha'i institutions to raise the profile of certain favored people — has meant that new members have come to exclusively be drawn from men on the appointed staff of the International Teaching Centre. The Baha'i equivalent of Kremlin-watching has drawn attention to the roles in these elections of nepotism, factionalism, and business ties, e.g. over the recently adopted "Ruhi" series.