From RationalWiki
(Redirected from Bertrand Russel)
Jump to: navigation, search 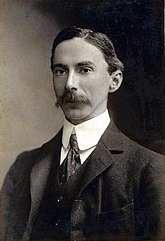 Bertrand "Bertie" Russell (1872—1970) was a British mathematician, liberal, pacifist, socialist,[1] philosopher and logician. He also wrote books and essays for popular audiences; a good many of these were full of his signature snark about religion. Russell's Teapot is a good example of this. Along with Gottlob Frege and Ludwig Wittgenstein, he is considered one of the founders of modern analytic philosophy

and one of the greatest logicians of the 20th century.

He coauthored Principia Mathematica with A. N. Whitehead (not to be confused with Isaac Newton's Philosophiæ Naturalis Principia Mathematica), which attempted to use symbolic logic to derive mathematics from basic axioms (1+1=2 is proved in Volume II). It is highly regarded by many mathematicians, but is pretty unreadable unless you have a brain the size of a planet, or no life (and that's still no guarantee). The book was an attempt to make Hilbert's Program a reality by its use of a finite and small set of axioms with which one could (in principle) derive all of modern mathematics. PM is essentially an attempt to make all of mathematics constructive.

Austrian logician Kurt Gödel eventually proved that PM is incomplete, which means that it does not have the ability to produce theorems that prove everything within its particular domain (all of mathematics in this case). The reason for this was essentially that Russell and Whitehead overlooked meta-mathematics, and did not believe (or it did not ever occur to them) that their system could be used to reason about meta-mathematical concepts. Gödel observed that you could in fact use PM with meta-mathematics, and he promptly invented Gödel-numbering, which allows one to prove things about PM itself in PM. Contrary to popular belief, he did not prove that it was "wrong", "inconsistent", "useless", or any other adjective that implies incorrect.

On a slightly less positive note, Russell also was a JFK conspiracy theorist, who did not believe that Lee Harvey Oswald was the killer.[2] However, he was over ninety years old when Kennedy was killed so let's cut him some slack.