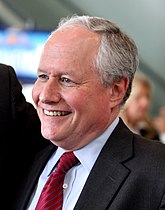 He loves that we get a little crinkle over our noses when we look at him like he's nuts.

William "Bill" Kristol (1952–) is a American triumphalist, pundit, "analyst," and "strategist." Since 1995, he is the editor of the journal of opinion The Weekly Standard. His father is Irving Kristol

, the man who also fathered the neoconservative movement.

Irv was actually a shrewd guy who said conservatives had "nothing left" to fight for once the Soviets collapsed. His son, on the other hand? "It's not going to happen. This is going to be a two-month war."[2] "A spectre is haunting the liberal elites... able to invigorate a McCain administration and to govern beyond it."[3] "No objective evidence [Palpatine] was 'evil.'"[4] And so on.[5]

Bill appeared with regularity, several times a year, on The Daily Show with Jon Stewart, where he displayed good humor in response to Stewart's rapier wit.

He was the only significant member of the Republican scribbling class to actively embrace John McCain in 2008, in contrast to others (e.g. David Brooks, David Frum, and even William F. Buckley's only son, for God's sake!) who appeared to retain possession of their faculties.

He is also a noted chickenhawk, even after the Iraq debacle.

Since the 2016 election cycle, Kristol has been one of the most vocal "Never Trump Republicans", and called Donald Trump a "bigot". He proposed putting together a conservative third party to run against Trump, but the plan failed due to lack of support. Everyone who neocons ever appealed to was the sort of bigot that Kristol claimed to be against, and no one else was right-wing enough to support neocons.