BioShock is a series of first-person shooter video games by Irrational Games, all of which have to date been published by 2K Games. All the games in the series are unique not just for their priority on their stories over shooting, but also for their great emphasis on exploring various political concepts. The main setting for most of the games is in a seastead environment, with the exception of Bioshock Infinite, which inverts this in a more upwards direction.

Fair warning to anyone who hasn't played any or all of the BioShock games: there are huge spoilers ahead! 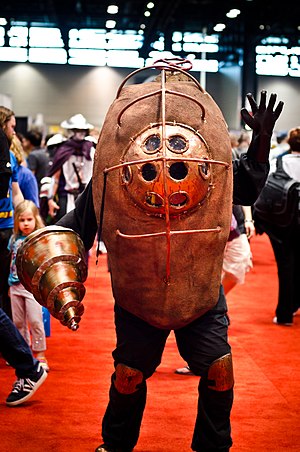 The video game BioShock[1] features what is probably the best-known example of a seastead in popular culture, and serves as a scathing criticism of Objectivism. Its setting, known as Rapture, is an undersea city in the Atlantic Ocean built between 1946 and 1951 by billionaire industrialist and White Russian exile Andrew Ryan.[2] Ryan envisioned the city as a place where the "best and brightest" can live free from the heavy hands of big gummint, organized religion, evil lazy parasites, and the scornful untermenschen that want to restrict them, and where they could ride out the nuclear war that Ryan saw as inevitable. There, they would build a society run in accordance with logic and rationalism, where brilliant artists, scientists, engineers, and captains of industry can live their dreams and fulfill their true potential. In practice, this meant Objectivist principles, the city serving as a version of Galt's Gulch (although run by a geothermal plant rather than a perpetual-motion machine). Everything would be privately owned, from the transit systems and production of food and fresh water up to and including the oxygen supply. Also like Galt's Gulch, Rapture would be kept secret from the world so as to prevent it from being attacked by NATO or the Soviets.

It goes about as well as any sane human being would expect it to. Society grew heavily stratified between the elites and the workers that they brought in to maintain their utopia, but things muddled along for about ten years, more or less functioning until one person decided he wasn't going to play nice. A New York gangster named Frank Fontaine infiltrated the place and built a criminal empire through his smuggling contacts with the outside world, and eventually founded an unscrupulous biotech company (see below) more concerned with money than ethics. He deliberately and cold-bloodedly harnessed working-class resentment to get the common man on his side, simply by introducing low-rent group homes for the working poor and orphanages for children. Don't mistake Fontaine for an actual altruist, though - the poor under his care were really no better off than they had been beforehand, as Fontaine was either indoctrinating them into his private militia or selling them off to human experimentation.

The tipping point comes with the discovery of ADAM. A viscous green liquid derived from a species of sea slug native to the seabed near Rapture, ADAM turned out to have powerful medical properties and utility for genetic engineering. Brigid Tennenbaum, the scientist who discovered it, was brilliant but personally uncharismatic and off-putting. The only backer she could find was Fontaine, who immediately realized the potential and cornered the market. Lack of regulation meant that it was quickly put to use in the most decadent manners possible, before its addictive properties and numerous negative side effects could become fully known.[3] Extra attention was paid by researchers on ADAM's offensive utilities, as people used it to give themselves superpowers. While there weren’t enough of the sea slugs to make ADAM commercially viable on their own, Tenenbaum soon discovered that implanting them into the stomach of a human being, specifically that of a young girl, allowed the slug to produce massive quantities of the stuff when they turned a piece of the stomach into more ADAM-producing tissue. As a result, orphaned girls were kidnapped and surgically parasitized in order to harvest ADAM in commercial quantities. These girls, dubbed “Little Sisters”, were then guarded by the most heavily-armored brutes in the city, referred to as “Big Daddies”, who were produced by taking impoverished men and grafting their genetically-augmented bodies into diving suits while using a steady stream of drugs and ADAM to break their minds in the process. Neither the "Little Sisters" nor their "Big Daddy" guardians ever knowingly consented to their fates. In short, ADAM represents a worst-case transhumanism scenario, one where a genetic arms race emerges while the populace grows addicted to the stuff.

Eventually, the city’s elites cynically abandoned their original ideals in their quest to stay in power, effectively becoming the very government that they had rebelled against. Mad artists murdered and mutilated people in the name of their horrifying "art," and took "freedom from censorship" to mean "freedom from any and all criticism by those too stupid to recognize my artistic brilliance!" Medical professionals had by and large taken to throwing the Hippocratic Oath out the window, instead performing horrific experiments on their patients for the sake of profit and ego, and medical care became "throw some ADAM on that bullet wound, it'll be alright". Critics of those in power found themselves unable to get their message across because all of the media and "public" venues were owned by those very leaders. All religion was outlawed (while Ryan pontificates about 'The Great Chain of Industry' which he believed would sort everything out in the best possible way), and missionaries attempting to smuggle Bibles into Rapture were executed on sight. Fontaine became a threat to the city's power structure with his new private army, so Andrew Ryan's men stormed Fontaine Futuristics and 'nationalized' it after Fontaine's death, while keeping Ryan's own ventures--real estate, fish futures, oxygen, electricity--privatized so they would continue to make him bank.

Life couldn't go on, though. In the end, Rapture's power structure became based not on wealth and influence, but on personal power and the ability to kill. A mix of festered working-class discontent and rampant abuse of ADAM gone horribly wrong precipitated a civil war on New Year's Eve 1958, from which Rapture never recovers. By the time the game proper starts in 1960, everything had gone to hell. Genetically-augmented and heavily armed citizens roam the city, scavenging whatever dwindling supplies they can procure while they jealously guard their own territories. Rapture's civilization has collapsed from lofty Objectivist ideals into an endgame of "might makes right" and "kill or be killed".

Based on their behavior throughout the game, players can determine whether or not they can follow the selfish philosophy of Rapture and seize power for themselves or they can take a more selfless route and aid the "Little Sisters" out of the fallen utopia. Needless to say, the more selfish and powermongering players act, the worse the ending is.

While BioShock explores how a society based solely on selfishness tends to eat itself alive, BioShock 2 switches this up and looks at how even acting in a radically opposite fashion to that can result in equal amounts of horror.

By 1960, Rapture has fallen into chaos and decay thanks to both the civil war and most of the population having been driven insane due to the long-term effects of uncontrolled gene splicing. By the second game, set in 1968, the survivors have overthrown the "captains of industry" that once led them and instead turned to extreme collectivism of a sort that would leave Pol Pot feeling a mix of disgust and admiration. Their leader, Sofia Lamb, preaches about the necessity of pure, absolute altruism, and works to indoctrinate her followers, ominously named "The Family", into abolishing free will in the name of equality. She plans to do so by conditioning her daughter Eleanor to be the living embodiment of this idea. However, this puts her at odds with the player character, an early-series Big Daddy with a genetically-hardwired bond to a single Little Sister who just so happens to be Eleanor.

The alternative (much better) cover

BioShock Infinite, meanwhile, takes seasteading and instead puts it in the air (skysteading, if you will). Around the turn of the 20th century, the United States builds a floating city/World's Fair called Columbia to serve as a demonstration of American power and ingenuity, only for it to go rogue and disappear. The people who took it over went on to build a society rooted in hyper-religiosity, American exceptionalism, dominionism, and virulent racism. In Columbia, White Anglo-Saxon Protestants (WASPs for short) are the dominant ethnic group, worshiping America's Founding Fathers as divinely-inspired figures (sound familiar?) and the city's ruler, Zachary Hale Comstock (taking his name from Anthony Comstock), as an all-knowing prophet on par with Jesus Christ. Comstock and his followers have taken to viewing the old U.S. as having fallen into a tyranny of progressivism, abolitionism, and "mud rule", while Columbia's underclass of blacks, Irish Catholics, Chinese and other "lesser races" toil in conditions of virtual slavery (their "natural place" in the eyes of the elite) in the factories producing Columbia's weapons and luxuries. Comstock’s right-hand man, a Simon Legree-esque robber baron named Jeremiah Fink, has full control of Columbia’s business economy and infrastructure, and uses this power to exploit his workers as much as possible: he forces them to live in ghettos near his businesses, gives them sixteen-hour workdays, deprives them of sick leave and lunch breaks, and pays them in scrip that can only be spent at his company stores. There's also a secret society allied with the Founders named the Fraternal Order of the Raven (a radical, hyper-religious, robe-wearing racist organization that glorifies the Confederacy and demonizes Abraham Lincoln and the Union. Sound familiar?). Much as in Rapture in the first two games, all of this eventually produces a reaction in the form of the Vox Populi, a band of insurrectionary anarchists who masquerade as the heroic champions of the underclasses despite being driven by nothing but the prospect of vengeance. There's also a smattering of quantum physics and multiverse theory, handled surprisingly well for a fictional property.

On a humorous note, a promotional image of the game tends to be passed around by conservative anti-immigrant groups as propaganda. It shows George Washington as a divine figure, with an angel and a halo of light behind him, hand-delivering the Constitution while surrounded by cringeworthy ethnic stereotypes of Africans, Asians, Mexicans, Irish, and Native Americans, with a caption reading "It Is Our Holy Duty to Guard Against the Foreign Hordes".[4] These groups seem to have taken to using this image unironically, seemingly having missed the point that the image (just like the game itself) was created specifically to mock them.

Less funny is the cover art, which has drawn some criticism for feeling as though it was designed by committee and not reflective of the game as a whole. Most important is the absence of Elizabeth, the co-protagonist of the game along with the player character Booker DeWitt.[5] However, the cover can be flipped in order to display a much better, more stylised piece of art, while the "Complete Edition" rerelease of the game proudly features Elizabeth next to Booker.[6]