From RationalWiki
(Redirected from Bonobos)
Jump to: navigation, search 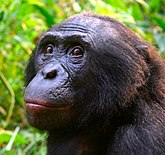 Fancy a shag?
Not to be confused with chimpanzees (Pan troglodytes), their closest extant sister taxon.

The bonobo (Pan paniscus), historically known as pygmy chimpanzee, lives in central Africa and together with the common chimpanzee is our closest living relative — and the most despised of all monkeys[note 1] by creationists. Because the two species are not proficient swimmers, the formation of the Congo River 1.5–2 million years ago possibly led to the speciation of the bonobo. Bonobos live south of the river, and thereby were separated from the ancestors of the common chimpanzee, which live north of the river.

Bonobos have a matriarchal society, with male aggression rare. Sex is used as a way to mediate conflicts; they do not mate monogamously. Females are slightly more sexually active than the males, and will engage in genital-to-genital rubbing with other females roughly once every two hours.[1] In addition the bonobo is notorious for its exuberant sexual activity, seen equally in both genders:

All this goes on both within and outside the family and involves adults, children and infants.

Humanity may, or may not, have something to learn: like why they are strangely immune to the Simian Immuno Deficiency Virus.[4]

This biology-related article is a stub.
You can help RationalWiki by expanding it.
Retrieved from "https://rationalwiki.org/w/index.php?title=Bonobo&oldid=2209560"
Categories:
Hidden category: