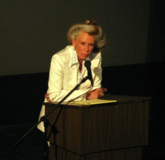 Catharine MacKinnon (1946–) is one of the more frequently misquoted feminists. In particular, her allegedly saying "All sex is rape" has been debunked.[1] Usually a clue that a given quote by her is spurious is that her first name will be misspelled as "Catherine".[2]

She went on to explain that she has never cared about trans women using women's bathrooms, and she now states that "I aggressively don't care."

Alongside Andrea Dworkin, MacKinnon helped develop a particularly extreme variant of feminism (though, to her credit, she never went full TERF like many of them did) that often took on a conspiratorial view of virtually every aspect of society and reality being a social construction on the part of men to suppress women.[5] This got to the point where the scientific method and the concept of objectivity were denounced as just being "what white men value about themselves", causing MacKinnon to be an early advocate of critical legal studies.

As with many paranoid worldviews, MacKinnon's ideology began to take on an increasingly authoritarian angle, of which the most notable examples could be her frequent attempts to ban pornography and her denunciation of the First Amendment as a tool of male privilege.[6][7] Weirdly enough in later years she became comparatively moderate next to the latter-day critical legal studies advocates who instead followed a more hard-line postmodernist view of society. The source of this disagreement is that MacKinnon actually does accept the concept of an objective reality but believes that it's been twisted to suit the needs of white males (and that the Enlightenment is part of this), to the point where we need to fundamentally uproot society to understand what that objective reality is, whereas many of the newer radicals reject the concept of objective reality as always basically being a power play in and of itself.[8]