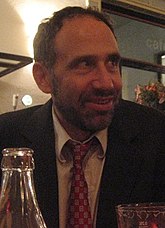 First-hand effects of "the dismal science."

Dean Baker (b. 1958) is an economist and columnist who identifies as progressive, but hasn't affiliated himself with any particular "school." After leaving Bucknell, he co-founded the Center for Economic and Policy Research (CEPR).

He became known for his deconstruction of the Dubya plan to partially pawn off privatize Social Security to Wall Street. Now he is most famous for being one of the first economists to predict the housing bubble, all the way back in 2002, and the ensuing recession.[1] Baker contends that it was easy to predict simply by looking at the rate housing prices were rising over inflation, which was unprecedented in the 100+ years these numbers have been tracked. Policies he advocates include financial reform, debt restructuring, keeping Fannie Mae and Freddie Mac as public entities, copyright and patent reform, and a voluntary, government-run pension program in addition to Social Security. He also runs the Beat the Press blog, where he rips on economic ignorance, innumeracy, and Wall Street lobbyists and shills in the media.