Anti-Oedipus[2] is a 1972 acid trip book written by french thinkers Gilles Deleuze and Félix Guattari. The book is the first half of the Capitalism and Schizophrenia series and is regarded as a critical work within postmodern philosophy and post-structuralism.

Like most works of postmodern philosophy, Anti-Oedipus covers many areas of study and is immensely cross-disciplinary. Deleuze and Guattari engage with philosophical problems (both modern and postmodern), politics, economics, linguistics, anthropology, marxism, and most apparent from the title, psychology. Even if it is seen as slightly outdated, the text is still a good framework for revolutionary change and puts forth many good insights into psychoanalysis and authoritarian culture.

It's also like most postmodern philosophy in how it is nearly incomprehensible.

In 1933, Wilhelm Reich published The Mass Psychology of Fascism, a psychological text that aimed to answer the question: "Why do people willingly submit to fascism and authoritarianism even though it is clearly against their own interests?"

The book compared Germany's descent into Fascism to the USSR's transformation into a communist state. Reich's main thesis is that Germany's conservative culture (particularly in regard to sexual conservativism), had repressed the libidinal desires of the population, making them accustomed to being docile and forcing their sexuality to be expressed in more masochistic ways. This is contrasted by Russia's more liberal views of sexuality, which in Reich's view led to more freed desire and hence, a less hierarchical society. Compared to the rest of Reich's much-disputed work, The Mass Psychology of Fascism was way ahead of its time and raised some serious objections to the nature of society and how it treats sexuality. One would expect a text like this to be post World War II, but it was actually a very sharp analysis for the era.

The Mass Psychology of Fascism is a key inspiration for Anti-Oedipus and a lot of it's major arguments can be seen as augmented versions of the ones presented in Reich's book. 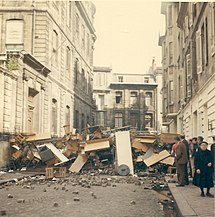 Street barricaded off during the May 68 uprising

During the period of May 1968, France was in a place of massive civil unrest. Though some aspects were in opposition to capital, socialism wasn't their main goal. In essence, the protests and riots were a rebellion against the culturally conservative society in which they lived. It was a rebellion against traditional hierarchies in schools, businesses, and most importantly for D&G[note 1], the family.[3]

Within the lens of Freudian psychoanalysis, and specifically through the framework of the Oedipus complex, it would be seen that the protesters were merely lashing out against the father (the metaphorical father that the state was taking the place of). Deleuze and Guattari were big supporters of the protests, and of course, strongly disagreed with the diagnosis that psychoanalysis provided. To D&G, the protests sidestepped the Oedipus complex by being about the abolition of states and authority and not the taking over of states and authority. The Oedipal complex implies an innate desire to kill the father and be with the mother, but the 68' protests were about tearing down hierarchies, not shifting them such as the Oedipal view would describe.

As stated earlier though, Anti-Oedipus is very broad topic-wise and cannot be merely simplified as a critique of psychoanalysis (as much as the title implies it). The events of May 1968, serve as a framework for the revolutionary character of the book. D&G want to lay out blueprints for a revolution and want to show the reader its possibilities.

Anti-Oedipus is often referred to as a "May 68'" book and many of the themes and goals of the work can be understood through its relation to the event.

When first opening Anti-Oedipus, one thing becomes apparent: this book is really weird. Like really weird. Not necessarily in the content (though that also is a source of confusion), but mostly in the writing style. Sentences and ideas bleed into each other and putting the book into a series of syllogisms would be absolute hell. Anti-Oedipus and A Thousand Plateaus (the second half of the Capitalism and Schizophrenia series), were deliberately written in a disjointed style to simulate schizophrenic thought.

The first part of Anti-Oedipus, named "The Desiring-Machines", starts with a description of the world. But, it's different from the descriptions provided by modern philosophy. It is a description of the world in motion. For example, within the Kantian view, the world is divided into many separate parts and categories (phenomena, noumena, a prior, a posterior, analytic, synthetic, etc.), it is seemingly static and final. Deleuze and Guattari don't explicitly argue against this view here, but they merely expresses a different perspective. What they would refer to as the schizophrenic or "machinic" perspective.

As put in the first paragraph:

Deleuze and Guattari believe that the world is infinitely divisible and that there is no definite, "true" division of things. For the purposes of describing the schizophrenic process, D&G divide and understand the world in terms of machines. For them, everything is a machine. Human-machines, eye-machines, computer-machines. From the smallest atomic machines to the largest "Celestial-machines". To Deleuze and Guattari, machines interconnect, produce reality (through their existence and through what they literally produce), and can be divided and redivided in any way. [6]

Just put any word before "-machine" and you'll be on the right track.

Deleuze is a big fan of Spinoza and is using this machinic perspective to parallel Spinoza's idea of god/nature. In short, Spinoza believes that everything is fundamentally one substance (that he referred to as "god"). Deleuze and Guattari make this most apparent with their analysis of the man/nature dichotomy.

In essence, the distinction of man/nature doesn't make any sense within a machinic world view. The things man produces are based on nature just as man is a production of nature itself. If it hasn't been made clear, Deleuze and Guattari, like most postmodernists, are also post-humanists.[8]

One of the most controversial concepts within Anti-Oedipus is D&G's idea of schizophrenia.

Even though their conception of schizophrenia and ontology of machines seem to line up, D&G still want to reinforce the idea that they are not promoting nor delegitimizing the harms that schizophrenia causes. Schizophrenic Delerium is debilitating and leaves the subject completely unsocialized.

For their immediate purposes, they view schizophrenia as beyond the Oedipal complex and the social forces that perpetuate it. In the words of Antonin Artaud, a schizophrenic they use as a case study:

Artaud is not the only case study D&G utilize.

Deleuze and Guattari want to set out that they do not just oppose psychoanalysis unconstructively, they want to take the valuable ideas of psychoanalysis (namely, the unconscious mind and childhood's effect on desire), and reform psychoanalysis into a more effective method of psychology. They present their practice of psychology as a "materialist psychiatry" and contrast it from the idealistic psychology they claim has plagued the history of western thought. D&G refer to their practice as "schizoanalysis" and the last part of Anti-Oedipus is dedicated to a breakdown of the idea.

One of the easier concepts to understand in Anti-Oedipus is their conception of how desire works and operates within the human psyche. They first make a distinction between two types of desire that are represented in western philosophy.

1. Acquisition: described as a desire of "lack" and is the most common conception. Specifically, the view supposes that desire is a reaction to an absence or deficiency within the subject. Acquisition-based desire is the view psychoanalysis adopts since the Oedipus complex (the fundamental tenet of Freudian psychology and apparatus for which all desire follows), supposes that all desire is based on the desire to kill the father and to be with the mother.[10]

2. Production: a conception of desire that rejects the idea that lack is what forms desire. It posits that desire is a continuous process and that perceived lack is illusory. To supporters of a productive theory of desire, lack is merely a consequence/coexistence of desire. This view is utilized most famously by Friedrich Nietzsche in the form of the "will-to-power", a continuous striving Nietzsche believed to be fundamental to everything.[10]

Artistic depiction of a Desiring-Machine

Deleuze and Guattari believe that acquisition-based desire is contradictory and has crippled the progress of western thought. Their view of desire conforms more so to production and is aptly named "Desiring-Production". Thus derives the title of the chapter, "The Desiring-Machines". To Deleuze and Guattari, Desiring-Production is at the basis of consciousness and produces reality. We are desiring-machines.

Psychoanalysis and Familialism: The Holy Family[edit]

The first subsection looks into the background of Oedipus' development and its basic mechanisms. They begin with a way to view Oedipus, namely, the "Oedipal Triangle". Also referred to as the "daddy-mommy-me triangle", the Oedipus triangle is a visual guide created by Deleuze and Guattari that represents how psychoanalysis maps desire. First and foremost, Deleuze and Guattari view the Oedipal Triangle as limiting due to its overly reductionist nature. To D&G, the world is absurdly unpredictable and chaotic (they even refer to the universe as the "chaosmos"). In Anti-Oedipus, desire is seen as explosive and constantly transforming, so the idea that desire could be mapped onto a triangulation is ridiculous to the authors. Deleuze and Guattari believe that modernist thinking has made people want to believe in constants (logic/reason will always apply, history moves dialectically, "I think therefore I must be necessary"), and that drive for groundedness and consistency has led to limiting universal narratives, more specifically, the Oedipus complex.

Within the world described by Anti-Oedipus, there are numerous forces/mechanisms at play.

First and foremost, there is desire. To Deleuze and Guattari, the world itself is tantamount to desire. It is constructed for us subjects via the experience of our consciousness (which to Nietzche and D&G believe to be merely a relation of desires/impulses)[14], and the entire social sphere is founded upon the desires of human beings. Desire runs the world, and humans are the #1 producers. Though most prevalent in part 2 of Anti-Oedipus, there exists another force: Repression. Repression exists in two different, but related manners.

We love our own oppression! Don't we, kids?