The bedbug Stephens, Bret, in its natural habitat (2008).

Bret Louis Stephens (1973–), simply known as Bret Stephens or by the nickname "bed bug", is an American conservative Pulitzer Prize-winning journalist for the New York Times (NYT), known for shifting the Overton window there to the right while being a "never-Trump-er" (while being actually a "sometimes-Trump-er").

Islamophobia and "Disease of the Arab Mind"[edit]

Bret Stephens, at the time writing for the Wall Street Journal (WSJ), appeared in 2017 on the virtual space of the fake university known as PragerU (funded by far-right millionaire Dennis Prager), in a video titled "What's Holding the Arab World Back?"[1] He begins the video with the incident at the 2016 Rio Olympic Games, when Egyptian judoka Islam El Shehaby

, after being defeated, refused to shake the hand of his Israeli opponent Or Sasson

, the former being chastized by the crowd. He uses this example to generalize about why "the Arab world is sliding into the abyss" (his claim).[note 1] Stephens then equated El Shehaby refusing to shake the hand of an Israeli adversary with hatred of Israel and Jews, claiming that it "corrupts every element of Arab society". 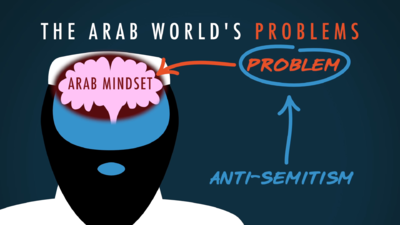 Yes, this is in the PragerU video.[3] What you are seeing here is a bearded blue man with a Taqiyah cap

, piercing his "Arab mindset" brain, with "problem" circled pointing to it, with "anti-semitism" pointing to that "problem".

Following that, Stephens alleges that his (baseless) explanation won't be found among "[mainstream] journalists and academics" (after all, he is a journalist, so what the hell is he even saying?), claiming that the latter by default shift the blame to the legacy of colonialism, youth unemployment, the sectarian divides between Sunni and Shia Muslims, and mentioning, sarcastically, "and every politically correct excuse they can think of" (in the video, the talk bubble reads: "It's NOT their fault"). Stephens then follows up with the claim that the Arab world expelled virtually every Jew over the past 70 years (no evidence or citation provided) and that Arab "intellectual life perverted by conspiracy theories and a perpetual search for scapegoats" (no hint of irony).

Lacking any historical context, the bedbug then goes to attempt to explain how the expulsion of Jews from Spain in 1492 caused its deprivation of "a class already notable for the astute handling of finance" (yes, he associated finance with Jews; an anti-semitic stereotype). He doesn't mention the Islamic Golden Age nor the fact that Al-Andalus (Muslim Iberia) historically protected Jews from the Christians from persecution and murder, allowing the works of Jewish philosophers such as Averroes

(Moses ben Maimon) to exist to this day.

An example of kinship that Stephens shares, now busy at work. (Cimex lectularius)

Breaking — There are bedbugs in the NYT newsroom.[4]

Why are we talking about tweets? Because Stephens emailed Karpf and his provost (provost: senior administrative officer) at George Washington University, complaining about it (and not being totally upset):

Someone just pointed out a tweet you wrote about me, calling me a "bedbug". I’m often amazed about the things supposedly decent people are prepared to say about other people — people they've never met — on Twitter. I think you've set a new standard.

I would welcome the opportunity for you to come to my home, meet my wife and kids, talk to us for a few minutes, and then call me a "bedbug" to my face. That would take some genuine courage and intellectual integrity on your part. I promise to be courteous no matter what you have to say.

Maybe it will make you feel better about yourself.

Please consider this a standing invitation. You are more than welcome to bring your significant other.

Karpf alleged that "cc'ing the Provost meant that he was trying to use his social status to get me in trouble. And that means it isn't about civility at all; it's about power."[7] Why is this relevant? Because Stephens wrote a column in the NYT Opinion titled Free Speech and the Necessity of Discomfort,[8] in which he claims that millennials are always triggered and propagates the usual right-wing tropes about liberal feelings.

Climate change skepticism and opposition to a Green New Deal[edit]

Comparing the left to Trump[edit]