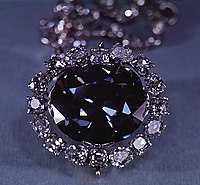 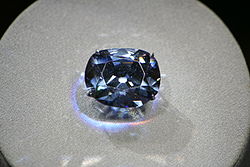 The Hope Diamond is one of the most famous jewels in the world, and is also rumoured to be cursed, bringing misfortune and tragedy to whoever owns it. Its currently owned by the Smithsonian Institution, and so far, nothing bad has happened to them. According to legend, now that the Smithsonian has acquired the diamond, the curse has gone dormant. It supposedly came from Indian Kingdom of Golconda, but that is somewhat difficult to prove.

Not really. The idea of a curse was most likely fabricated to increase the gem's appeal and newspaper sales. In 1908, the Washington Post published an article titled "Remarkable Jewel a Hoodoo—Hope Diamond Has Brought Trouble To All Who Have Owned It".[1] Is the Hope Diamond cursed? Of course not! But where did such a along with another article containing a list of those who apparently fell victim to the curse. These are what most likely popularized the idea of it being the diamond having some kind of curse.

According to the stories, all the owners of it either died, or were hit with some kind of misfortune, although many of the deaths could be just natural causes. A few notable names that are said to have held it at one point include Louis XV, Louis XVI, and Marie Antoinette. According to the Diamond's lore, it's said that it was the reason that Louis XVI and Marie Antoinette got guillotined during the French Revolution. However, this is false, as historical records show that Antoinette never wore the diamond.[note 1].