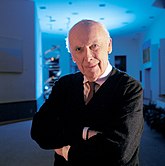 James Watson is an American scientist who took part in the elucidation of the structure of DNA.

In a well known case of Nobel disease, Watson stated "[T]here is no reason to anticipate that the intellectual capacities of peoples geographically separated in their evolution should prove to have evolved identically". Watson has consistently asserted that there are IQ differences between races.

Watson is obviously ignorant of modern genetics, which has found that there is more variation within groups. Watson rightfully had all of his speaking engagements cancelled, such as at the London Science Museum who stated “[W]e feel Dr. Watson has gone beyond the point of acceptable debate and we are, as a result, canceling his talk.”, and was fired from his laboratory.