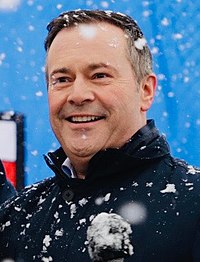 Jason Kenney during the 2019 election

Jason Kenney is the current premier of Alberta, Canada and the leader of the United Conservative Party, which was formed in 2017 by a merger of the Progressive Conservative Party and the Wildrose Party. He was elected on a platform of budget cuts, ditching environmental regulations (such as the carbon tax), and a plan to fight back against the "defamation" of the energy industry.

As can be expected of any right-wing politician in Alberta, Kenney is very defensive of the province's oil industry, feeding into a persecution complex held by many Albertans.

His government has been known to harass people who speak-out against them, or the Albertan oil & gas industry.

His government has received much criticism over it's handling of the COVID-19 pandemic. As of December 2020 he has the lowest approval rating of any Canadian premier at 30%, down from 67% back in April.

As promised in the party's 2018 election campaign[1], the United Conservative party made sure to repeal the environmental progress made by the previous NDP government, which involved ditching the carbon tax, erasing the climate leadership plan, lifting the emissions cap on the tar sands, and cancelling the phaseout of coal power plants[2].

During the 2019 election campaign, Kenney announced his Fight Back Strategy in which he would make a 'war room' to respond to accusations against the energy industry[3]. While in government, this plan got the attention of Amnesty International, who sent him a letter telling him to abandon the strategy, saying it would undermine human rights in the province and cause a chilling effect against human rights defenders[4]. He bit back at Amnesty[5], and the war room would then be established as the Canadian Energy Centre

Also part of his election campaign, Kenney's UCP government launched an investigation of supposed 'foreign meddling' in environmental organizations[7]. To justify this, he claimed that the The Tar Sands Campaign has been funded from US foundations such as The Rockefeller Brothers Fund in order to 'defame' the Albertan oil industry & prevent investment & export. He referenced blogger Vivian Krause, the originator of this conspiracy theory, who had been pushing it for years[8]. Of course, Jason Kenney is totally fine with foreign investment in the tar sands. It was claimed that Alberta was being targeted to make it's oil production less competitive with the US, but an investigation into climate funding from international foundations found that the US had received 60× the amount of funding that Canada had received since 2009. So much for Kenney's persecution complex.