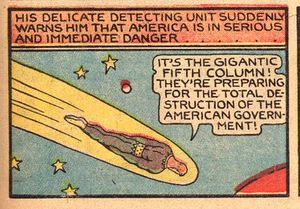 Jay Sekulow, owner of the The American Center for Law and Justice, fights for the rights of all.

Jay Sekulow (1956–) is an evangelical right wing lawyer and political pundit, whose fundraising skills running the nonprofit American Center for Law And Justice (ACLJ) and associated media empire have made he and his family fabulously wealthy. He also acts as personal legal counsel to Donald Trump.

Sekulow is a self-described Messianic Jew and staunch Zionist. He has argued several times before the Supreme Court of the United States, specializing in First Amendment law related to conservative issues.

that advocate for right wing and evangelical causes. The ACLJ, the best known of these, presents a "borderline extreme right wing bias" in news reporting.[1]

The ACLJ was opposed to the Defense of Marriage Act and supported discriminatory practices against homosexuals in Kenya and Zimbabwe, going so far as to cozy up with the notorious Zimbabwean dictator Robert Mugabe.[1][2][3][4][5]

When politically expedient, Sekulow stoops to supporting conspiracy theories, including the wingnut bullshit surrounding the murder of Seth Rich.[6]

Sekulow's organizations are virulently opposed to abortion, are known for spreading misinformation about abortion issues, and use the abortion debate as a fundraising tactic.[4][7][8] Sekulow has provided legal counsel for the extremist anti-abortion group Operation Rescue and other groups with varyling levels of success.[9][10]

While Sekulow's empire ostensibly supports religious freedom, their support applies only to Christian evangelical causes that share their hard right wing political views. For many years, they have openly encouraged the politicization of the religious right.[11][12]