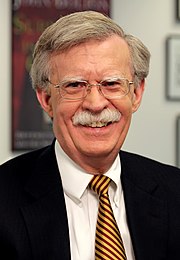 John Robert Bolton (1948–) is the former National Security adviser of the United States. He was hired on March 23, 2018 by then-U.S. President Donald Trump.[1] He is also a huge wingnut, whose foreign policy is best described as Jeane Kirkpatrick on steroids.[2] He wants to invade Iran and Venezuela and sabotage any peace talks to "prove" peace doesn't work.

He has worked, in some capacity, in every Republican administration since the Reagan era - he was an Assistant Attorney General for Ronnie himself, he was an Assistant Secretary of State for Bush the elder, and Ambassador to the UN under his inept son. The last was the most controversial-the Democrats actually filibustered it.[3] Like most unelected functionaries GOP presidents treat like hand-me-downs he is a neoconservative. Despite him being labeled a neocon by most people, he dislikes being called one.[4] He is a former member of the American Enterprise Institute (AEI), and contributed several articles on there.[5]

He left his position as National Security adviser on September 10, 2019. [6] It never became completely clear whether he resigned or was fired by Trump, although most evidence seems to point towards the latter view.[7]

Bolton was a supporter of the Vietnam War, but conveniently avoided going overseas by getting a student deferment followed by enlistment in the National Guard (much in common with his later boss Dubya) and later the Army Reserve.[8] Thus making him worthy of the chickenhawk title.