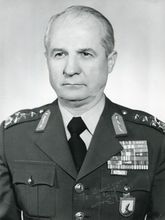 Ahmet Kenan Evren (1917–2015) was a Turkish dictator who served as president from 1980, when he led a military coup d'état, to 1989, when he resigned in favor of his chosen successor, Turgut Özal. He was responsible for killing many leftists, gays and nationalists under his reign.[1]

Between 1958-1959, he was appointed as a manager to the demilitarization zone at South Korea. He was a strong anti-communist and supporter of the Cold War since his earliest years. His views helped him to ascend the military ranks, becoming a chief of staff on 1 May 1977, with the retirement of a former general who had progressive political views.

During 1960s-1970s, with the rise of democracy in the nation following the coup of 1960, there were clashes among socialists, communists and nationalists/fascists. Those political clashes were sometimes resulted in street violence.

At 12 September 1980, Evren announced a coup and his reign as the dictator of the nation. First, he banned all of the leftist and centrist progressive political parties (even CHP, the social democrat founder party of the nation) and put all of those politicians and activists in prison, executing many of them while not touching the famous ones. He even killed a 17-year old communist named Erdal Eren, saying, "Should we feed him rather than hang him?"[2]

In 1982, with the catastrophic situation of the GDP, Evren decided to restore democracy, but in a way which would be in his favor. So he had announced a new constitution and made a referendum for it, which resulted in a 91% win.

Despite being an anti-communist, Evren had good relations with the People's Republic of China.

On January 10th, 2012, Turkish courts decided to press charges against the dictator. The parliament decided to lower his military rank from general to private, and sentenced him to life imprisonment at home due to his age-related health problems.