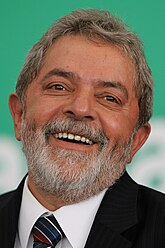 Luiz Inácio Lula da Silva is a Brazilian politician who served as president of Brazil from January 1, 2003 to December 31, 2010. He transformed Brazil from a debtor to a creditor, and rapidly grew Brazil's economy, but he is suspected of corruption, which was and is often attacked by his opponents. Lula has made Brazil the world's eighth-largest economy. He combined liberal economic policies with state-led welfare policies. His political opponents claim Lula ruined the economy, but that's a load of bull, as Brazil's economic indicators at the time show. However, his successor was incompetent and failed to solve Brazil's serious security problems.

He was convicted of receiving bribes in 2017. In 2019, he was released from prison pending appeal, and appealed his charges,[1] a venture which ultimately paid off.[2] Since then, he has emerged as the most prominent critic of the far-right government of Jair Bolsonaro, with speculation centering around a run for the presidency in 2022.[3]