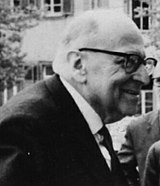 Max himself. Just look at that giant Jewish nose.

Max Horkheimer (1895-1973) was a critical sociological theorist who discussed the evolution of reason and societal structure. Born in Germany to a Conservative Jewish family, he grew up working for the family business and studying philosophy and psychology. Taking an internship under Hans Cornelius, he would eventually become involved in the Institute for Social Research in Frankfurt, Germany. He was heavily involved with the Frankfurt school during its years of activity, working with people like Theodor Adorno and Jurgen Habermas to develop their works during and in the wake of World War two. In particular, they discussed the nature of bureaucracy and imposing structures during a time when that particular topic was popular in academic discussion.[1]

Max Horkheimer and Theodor Adorno wrote a book about the nature of Enlightenment and what it meant for the evolution of ideas. While the enlightenment is regarded as a time where we developed groundbreaking ideas of logic, reasoning, and science, they, in fact, may have smuggled in bourgeois ideas that undercut the very fundamental bases of society. Essentially, while rules of logic might make sense, the context at which those logics were applied and the development of those logics coincide with who is developing them and taking credit for them. The idea that the puffy philosopher is the intelligent orator who develops these ideas presents an implicit image that only an elite class is capable of developing these ideas. Overall, it is a critique on the context of reality, and the development of ideas, and which ideas are considered important or not. Instead, noting which ideas have been universalized from a bourgeois perspective is vital for undercutting and critiquing society.[2]

This book attempts to illustrate the failure of humans to address their reality and make certain parts of it for granted, either from their own volition or through coercion. Why are people unhappy or feel unfree despite claims of freedom? Where does this feeling come from, and why does our current reality seem so ripe with institutionalized contradiction? This book attempts to answer this.

Objective reasoning, on the other hand, is the type of reasoning that determines the goal. Rather than determine which type of vehicle to use to get to a destination, you are determining the destination itself. Instead of determining a type of economy to an already given set of definitions of ideas of freedom and property, you question the notions of freedom and property itself. Essentially, it is not the 'how' of the question but rather the 'what' of reason, the question of "what should we do"? These two types of reasoning are ostensibly used in tandem with each other to create a functioning society complete with goals, actions, and language.

Horkheimer's main critique, however, is that people are not doing objective reasoning to the extent that it used to be done. Rather, the goal is increasingly taken for granted with higher emphasis being placed on instrumental reasoning. That is to say, while there is an illusion of choice between the different ways to do something, people are seldom questioning that very thing to begin with. It creates a segment of society that is functionally a sunk cost fallacy, in that people are cohering to an idea no matter what and enacting a form of real-time cognitive dissonance-type actions to rectify any problems that societal axiom presents. Essentially, people are rearing towards a goal without actually questioning that goal.[3]

Stemming from the previous points about reasoning, Horkheimer critiques the political philosophy of pragmatism, and in particular, sometimes segues into a branched critique for scientific research.

Horkheimer roughly defines pragmatism as the philosophy of getting things done in a suitable way, and in particular valuing the abstract ideal of unobstruction. He likens the philosophy of pragmatism to a process at which we only understand things that can be useful towards us, as a path towards knowledge that only considers to be true what 'works'. He finds this problematic because what 'works' is intrinsically tied to the forms of language we know today, the historical context of knowledge, and the current perspective of use in terms of a prior understood goal. Because pragmatism as a philosophy doesn't actually make the goals, nor addresses these ideas of self-critique, it is only useful insofar as it can be used to understand a scope of information, and not reality as a whole.

He also critiques science somewhat the same: he understands the usefulness of science, but rightfully points out that scientific discussion is neither perfect nor completely accurate to reality. While this sounds like a right-wing critique of the failures of science, Horkheimer points out that its actually because of the limitations of definitions, and our inabilities to critically examine said definitions when interpreting experiments and data. When we only look at things through a specific lens of understanding without critiquing the way we operationally defined them, or the way we cohere those definitions with our current lexicon, the scientific method itself is limited to its own petard. Essentially, it is useful but only insofar as it can be used to understand a scope of information. It differs from pragmatism somewhat, however, in that the scientific method is a profoundly more rationalized philosophy than pragmatism itself, but the doctrine of means is the only place that it can reside. Unfortunately, we can't rely on science for abstract concepts such as right and wrong, good and bad, etc. We must understand it for what it is and treat it as such, rather than treating everything that science does as reflecting raw reality instead of the socially constructed one.[4]