From RationalWiki
Jump to: navigation, search
This is a draft that anyone is free to edit as they would a mainspace page. 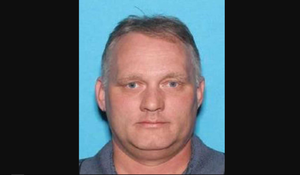 Robert Gregory Bowers (1972–) is an antisemitic Neo-Nazi who had frequented the "free speech" site Gab. On October 27, 2018, he shot and killed 11 Jewish churchgoers at the Tree of Life – Or L'Simcha Congregation

synagogue in Pittsburgh, Pennsylvania.[1] He hates United States President Donald Trump due to Trump supporting Israel and him not hating Jewish people enough.[2] The shooting, despite the shooter denouncing Trump, was said to have been inspired by rhetoric used by the president.[3]

While Bowers was active on Gab, he frequently made antisemitic and racist posts. He is a holocaust denier and reposted famous Neo-Nazis and conspiracy theorists on his Gab account, onedingo.[4] He also often posted far-right conspiracy theories, such as the white genocide conspiracy theory and made a few posts about The Great Replacement. Before the shooting, he made a post claiming HIAS (Hebrew Immigrant Aid Society) were responsible for bringing Central American migrants into the United States border. He then stated "I can't sit by and watch my people get slaughtered. Screw your optics, I'm going in."

When Bowers entered the Tree of Life synagogue, he yelled "All Jews must die!", shooting at churchgoers inside. He used an AR-15 and three Glock handguns during the massacre. 11 people were killed and 7 were injured. Bowers was one of the seven injured. He was indicted on 44 counts four days later after the shooting.[5]

As of 2019, the Pennsylvanian government were seeking the death penalty for Bowers.[6]