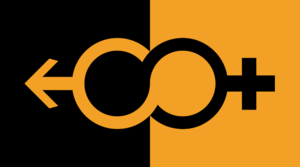 A common variant of a "superstraight" pride flag. The coded Nazi symbol (8 = H) and porn-site color scheme are totally accidental.

"Superstraight" is a sexual orientation invented by alt-right trolls to describe heterosexual individuals whose attraction does not include transgender people. It is another example of a 4chan psy-op intended to sow division within the LGBT community. The meme spread throughout social media in March 2021, finding notable support among TERFs and other transphobes.[1][2][3]

Funnily enough, this meme seems to have been predated by a 2017 standup routine performed by transgender comedian Robin Tran, in which she coined and used the phrase "super straight" to mean exactly the opposite of what the transphobes are now taking it to mean: