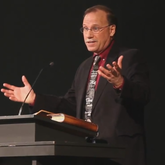 Weiland talking out of his rectal cavity as usual

Ted R. Weiland is a far-right American Christian fundamentalist who promotes racist "Christian identity" ideology.[2]. The man is so out there that even other advocates of 'theonomy' condemn him. He makes some fairly bold claims about his ideas of turning America back to the laws found in the Bible, particularly those found in the Old Testament. According to Weiland,

Weiland's advocacy for introducing Biblical law leads him to oppose the United States Constitution, an unusual stance for an opponent of open borders but certainly not one inconsistent with the rest of his beliefs.

Weiland is, unsurprisingly, opposed to freedom of religion, to the point of being in favor of the death penalty as a punishment for promotion of religions other than Christianity.[4]

This is a draft that anyone is free to edit as they would a mainspace page.
Retrieved from "https://rationalwiki.org/w/index.php?title=Draft:Ted_R._Weiland&oldid=2059918"
Categories: