From RationalWiki
(Redirected from Eoanthropus)
Jump to: navigation, search 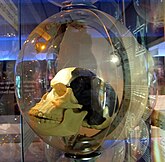 The skull in question.

Piltdown Man (which the locals call "Piwtdown Man") was a hoax fossil of a hominid jaw and skull bone found in a gravel pit in 1912. At the time it was embraced by some as evidence for the evolution of humans from other ape-like hominids.

After it was revealed as a hoax in 1953, Piltdown Man came to represent something else entirely: concrete evidence against evolution. It is repeatedly cited as proof evolution is a hoax — despite the logical flaws in such thinking.

It's also worth noting that Creationists have presented a "Piltdown man" of their own.

Portrait of the Piltdown Gang by John Cooke (1915). Charles Dawson is standing in front of the painting of Charles Darwin.

The "Piltdown Man" is a famous hoax consisting of fragments of a skull and jawbone collected in 1912 from a gravel pit at Piltdown, a village near Uckfield, East Sussex, in England. The fragments were thought by many experts of the day to be the fossilised remains of a hitherto unknown form of early human. The significance of the specimen remained the subject of controversy until it was exposed in 1953 as a forgery, consisting of the lower jawbone of an orangutan combined with the skull of a fully developed modern man. Though the Piltdown Man was recognized as a fraud by 1953, it was not until 1996 that the hoaxer was "conclusively" identified as Martin A. C. Hinton, a curator of zoology at London's Natural History Museum.[1] Or was it Charles Dawson, the discoverer of the Piltdown Man? The endless argument of who was the hoaxer would seem to remain unsolved, as Dawson was exposed in 2003 as a serial faker of fossils.[2] There was likely just one forger: Charles Dawson who had the means, motive and opportunity to carry out the hoax, and was present at all three digs.[3][4] Eoanthropus dawsoni — Dawson's dawn man — was more appropriately named than the victims of the hoax ever realised.

The Piltdown hoax is perhaps the most famous paleontology hoax in history. It has been prominent for two reasons: the attention paid to the issue of human evolution, and the length of time (more than 40 years) that elapsed from its "discovery" to its exposure as a forgery.

The main point overlooked by detractors of evolutionary theory is only early after its initial discovery did Piltdown Man play a significant part in the overall view of the "descent of man". By 1930 a large number of other finds showed that the earliest evolutionary steps from ape-like ancestors to humans were about gait and teeth, not brain, and that those early pre-humans were found exclusively in Africa. Piltdown was young enough (claimed to be about 500,000 years old) to be outside Africa without being an anomaly, but the combination of apelike teeth, big brain and high forehead made it very suspect, until the hoax was finally revealed. In fact, as early as 1913, David Waterston of King's College London published in Nature his conclusion that the sample consisted of an ape mandible and human skull.[5] Likewise, French paleontologist Marcellin Boule concluded the same thing in 1915. A third opinion from American zoologist Gerrit Smith Miller concluded that Piltdown's jaw came from a fossil ape. In 1923, Franz Weidenreich examined the remains and correctly reported that they consisted of a modern human cranium and an orangutan jaw with filed-down teeth.[6]

See the main article on this topic: Nationalism

It has been suggested[7] that a sense of hurt national pride played a role in the Piltdown Man hoax. By 1912, many hominid fossils had been discovered in mainland Europe, most notably Neanderthal Man in Germany and Cro-Magnon Man in France, and they were even cropping up in Africa and Java (Indonesia), yet Britain had none. Today, we know that this is because the British Isles were glaciated when early hominids first arrived in Europe, yet for the British people at that time (at the height of the Empire), it was unacceptable that their homeland, the cradle of civilization and industry, the center of all that is right and proper in the world, played no role in the evolution of humanity and was only settled relatively late. In other words, they were nothing more than colonials compared to the mainland, something that no respectable Brit found appealing whatsoever. The fact that an elephant-bone tool that was conspicuously shaped like a cricket bat[8] accompanied the Piltdown "discovery" lends further credence to this hypothesis.

The fact that Piltdown Man was a deliberate fraud has repeatedly been used by creationists and intelligent design advocates as evidence that the entirety of evolution is a fraud. The problem with this should be self-evident, but let's go through it anyway.

It is true that Piltdown Man was a deliberate fraud, which did confuse paleontologists for many years. Some scientists accepted it, while others were skeptical right from the start. Since nature doesn't lie, most scientists take field discoveries at face value, trying to explain the discovery within the current understanding of the particular field. However, anything that falls too far outside of the expected is received with a highly skeptical eye. The case of Piltdown is no exception, and it is worth noting that experts in the field almost immediately began to question the find, as they should have.

As pointed out In James Burke's "Worlds Without End" (Day the Universe Changed series) one of the reasons the Piltdown hoax lasted as long at it did was it fitted the then prevalent structure of finding a human like skull with an ape-like face. In fact, in 1913, David Waterston of King's College London stated in Nature that the find was an ape mandible and human skull[9] and French paleontologist Marcellin Boule said the same thing in 1915. In 1923 Franz Weidenreich stated after careful examination that the Piltdown find was a modern human cranium and an orangutan jaw with filed-down teeth[10] but because Piltdown fit the structure so well other scientists let the model drive their thinking rather than the evidence itself.

Piltdown Man was created with the objective of fooling scientists, not laypeople, so it only succeeded for a short time. The very fact that 1) it was eventually revealed to be a fake, and 2) that it was exposed as such by scientists is evidence that science is inherently capable of seeing through illusion, acknowledging errors, and refining its ideas by use of the scientific method. It shows that theories like evolution are based on solid and consistent evidence[11] that behaves in expected ways. It is also worth noting that though the creationists like to chirp about evolution's errors, frauds, or simple mistakes, not one of those errors or frauds has been exposed by so-called "creation science". Every single one of them, from Piltdown to Haeckel, were found by experts in evolution, doing the work of evolutionists.

Conversely, religiously-derived creationist beliefs do not change in light of new evidence, are not capable of evaluating the quality of a specimen, cannot distinguish a hoax from a real specimen, and cannot adapt to new information about the world from genetics to the size of our universe. Most importantly, they fail to provide any new understanding of the world.

The fallacy of those using Piltdown Man to disprove evolution can be summed up thusly: