This essay is an original work by several authors. Please comment only on the talk page.

Andrew Schlafly has several times stated that most - if not all - of the greatest achievements of human history have been made by teenagers[1] ("...like my students"[2]). To back this up, he has provided one specific example: The Gospel of John (which was probably not written by a teen, though he has a baseless theory that it was). To examine this claim more carefully, we shall try to examine achievements that could be reasonably called the greatest ever, and see how many of those were made by teenagers. To be more than fair to Schlafly, we will at times try to gear this towards accomplishments he is more likely to favor, specifically those tied to Christianity and America. Furthermore these examples are generally confined to "classics", using an almost stereotypical interpretation of the term, in order to deflect claims of revisionism and liberal bias. Particular Schlafly favorites are footnoted thusly:[3], while entries he has not specifically expressed admiration for, but should be right up his alley, are footnoted thusly:[4] (Click "edit lead section" for instructions on how to add this footnote to items)

Not included in this list are groundbreaking achievements which occurred prior to recorded history, such as the wheel, domestication of crops and animals, controlled use of fire, writing, etc. as these cannot begin to be attributed[5].

Ages, where listed, will often be approximate. In those few cases in which the age in question is near the teenage years, we will attempt to be more specific.

Summary: while some teenagers undoubtedly had a hand in the construction of some or all of these, they were designed by adults. 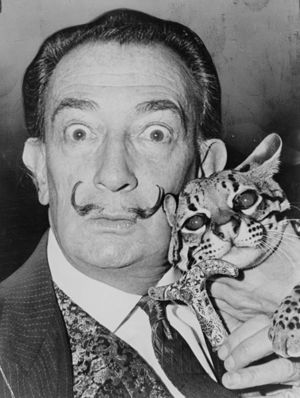 Salvador Dali and his ocelot.

Summary: No contributions from teenagers in this field, based on generally accepted masterpieces.

Summary: as with architecture, teenagers were undoubtedly involved in the construction of many of these, but the engineers in all cases were older.

Summary: Polo potentially could be an example, but he appears to be the only one. There were almost certainly teenage sailors on many expeditions of discovery, but as labor, not in positions of leadership.

No single inventor, though the Ford Motor Company is credited with the moving assembly line. Henry Ford was around 45.

Designed by German chemist Fritz Haber, age 41, in 1909. By producing ammonia (for fertilizer) from atmospheric nitrogen, it eliminates the greatest limitation on plant growth, and therefore the human population. One-fifth of the world population could not be fed without it.

Summary: by all appearances, none of the above appear to have been invented with the aid of teenagers.

Summary: at least since the end of ruling monarchies, teens have generally been excluded from government, so it is therefore not surprising that they would not make great accomplishments in this field; and indeed it appears they have not.

Summary: With the possible exception of Rimbaud (who, incidentally, is the one who is debateably a classic, if not forgotten by the rest eg. Harold "Omni-Critic" Bloom canonizes his work[6], a crazy person at the Guardian does not [7]) none of the above works were written by teens. The best Conservapedia has done is to include Frankenstein (written by Mary Shelley at 18, allegedly), which, while a classic, seldom, if ever, makes lists of greatest books of all time. Christopher Paolini's Eragon, written when he was a teenager, has also been cited, but though a commercial success, it cannot objectively be called one of humanity's great achievements by any standards. Furthermore, a scan through wikipedia's "American Literature" gives no contributions by teens[8].

Summary: Whilst there is an old myth that mathematicians reach their peak before 30, few achievements are made by anyone under 20 as a university degree is required before you possess the necessary knowledge to make any breakthroughs. Even child prodigies such as Terence Tao

Summary - Given the amount of research, clinical understanding, and practical experience necessary to be a medical researcher or practicing physician, the overwhelming majority of achievements in the field of medicine are not the result of Doogie Howser, MD.

Summary: while teens certainly fought in all the battles above, with the exception of Joan of Arc at Orleans (and the main strategist was Jean de Dunois, aged ~27) the leaders and strategists were adults. Alexander the Great, the archetypical young commander, was 20 by the time he gained control of his armies. Since battles are won by soldiers, not generals, one can attribute some of the achievement to teenagers in this category. However, they would still be in the minority.

Summary: There are quite a few composers who are known for the skills acquired in their teenage (and even pre-teen years). What they all have in common is that their early works haven't found their way into the standard repertoire of classical musicians, or listeners. The sole exception is Felix Mendelssohn, who wrote the overture to A Midsummer Night's Dream at the age of 17. By the way, Mendelssohn was a child prodigy who would have left young Mozart in the dust, so I think we can freely admit that one of the most gifted individuals in western history wrote a worthwhile piece of art music in his teens. In the rock and roll era, some notable works came from people while they were teenagers, for example the early works of Elvis and the Beatles. However, it is difficult to equate the three chord, simple melody of "Love Me Do" with the genius it took a completely deaf Beethoven to compose his final symphony. (Also, why do they have to grow their hair so long these days? You can't hardly tell the boys from the girls anymore. Of course, the Beatles went on to create incredible works in their mid-twenties. Elvis wore pantsuits in Vegas and killed himself with drugs.)

Summary: none of the major achievements in the field of philosophy seem to have been made by teenagers.

Summary: being very generous and allowing John to be counted as a teenage author of The Gospel of John, we have two accomplishments by teenagers, one of which is likely mythological (David vs. Goliath). Disregarding their spurious nature, they are still dwarfed by the accomplishments of adults.

Summary: none of these appear to have been accomplished by teenagers.

Summary: none of the speeches widely considered among the best of all time seem to have been made by teenagers.

Though this list could by no means be considered definitive, it still quite soundly establishes that teenagers are not responsible for most of the greatest achievements of mankind. With well over 200 examples of the greatest achievements in numerous fields (some taken straight from the mouth of Schlafly) there are less than a dozen that can be reasonably attributed to teens. Examining Conservapedia's list of great achievements by teenagers (which does not claim to be the greatest of all time, just accomplishments by teens) we have included some here (even though they are by and large quite questionable), while most of the others can make no real claim of being among humanity's greatest accomplishments, e.g. becoming a nun, receiving the Victoria Cross, becoming a chess champion, starting a profitable company, performing with an orchestra, being gunned down by sociopaths, starting Facebook (a site Andy has specifically expressed derision for) or Napster (nor can anyone imagine he is a fan of music piracy, just image piracy at CP). There are some not included here for which a case for inclusion can be made, e.g. Frankenstein, The Diary of Anne Frank, Mozart's Mithridate, but to lower the bar to include these would necessitate the admittance of many, many other works by older people, which would only further erode Andy's assertion. As Mithridate is not one of the most renowned works of Mozart, let alone the entire genre of classical music, inclusion of it would mean inclusion of every piece of enduring classical music for the last 300 years. Likewise Frankenstein's inclusion would mean the inclusion of just about every novel that is generally regarded as a "classic", literally hundreds - or thousands - of books, almost all written by adults.

Should Andy Schlafly ever even acknowledge this list (something he would never do, given its authorship) he would, of course, immediately dismiss it as liberal biased propaganda, without offering any alternative achievements (though he would likely reiterate the Gospel of John). To combat this, we can examine lists made by others, generally each specific to one category. Of course, he would just as readily dismiss those as liberal "experts" with an agenda, but he can hardly claim that they were made specifically in response to his list. We can also examine lists done by polling the populace, or, in some cases let the invisible hand decide and base the greatest works on the highest sales. Lists abound on the internet, and we have plenty from which to choose.

Writings on all subjects (not confined to literature)[edit]