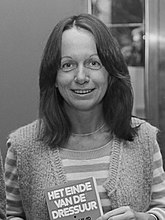 Esther Vilar (born 1935) is a self-described "feminine feminist" (as opposed to the "masculine feminists" she critiqued in a 1975 debate).[1] She also has written books and plays in which Albert Speer

is allowed to defend his actions as Nazi architect and minister.

Vilar's most famous work is The Manipulated Man, a book that argues that men are slaves to women.

According to the book, women only fake an interest in subjects such as science or technology in order to get men to fall in love with them, under the false belief that being able to memorize facts indicates intellectual curiosity and an ability to think analytically.

The book says that in reality, women are interested in totally different subjects than men, and take joy in doing the light housework that they have tricked their husbands into regarding as demeaning. This allows women to reserve that easy work for themselves while their husbands do the hard work of providing for the family[2].

This article is a stub.
You can help RationalWiki by expanding it.
Retrieved from "https://rationalwiki.org/w/index.php?title=Esther_Vilar&oldid=1929612"
Categories:
Hidden category: