From RationalWiki
(Redirected from Fun:Crocoduck)
Jump to: navigation, search

The Crocoduck is a hypothetical animal, intelligently designed by Creationists, and intended to demonstrate two things:

The idea behind mocking up this hilarious mongrel was to make nonbelievers look stupid — a plan which backfired completely. Unsurprisingly, the mere conception of anything as half-baked as a 'Crocoduck' successfully communicated the polar opposite message — with the Crocoduck fast becoming a running gag in the reality-based community.

Honorable mentions include PZ Myers owning a Crocoduck-patterned tie (which he hilariously wore at the Creation Museum),[3] and Atheist YouTuber "King Crocoduck" honoring this timeless Creationist own goal

as his nom de plume.[4] Every October 28th, Potholer54 also hands out a Golden Crocoduck Award to one lucky Creationist;[5] 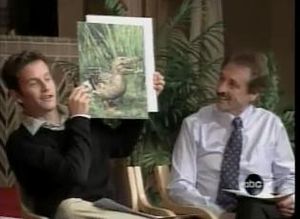 "♫ TAA-DAAAH! ♫"
See the main article on this topic: Rational Response Squad debate with Way of the Master

The Crocoduck's non-existence was first brought to light by Kirk Cameron and Ray Comfort, during a 2007 debate on the existence of God (held at Calvary Baptist Church

in Manhattan) — parts of which aired on ABC Nightline

We imagined would-be genuine species-to-species transitional forms. We called one a 'Crocoduck' and another was called a 'Birddog.' This was to show exactly what evolutionists believe, but can't back up through the fossil record."

Consider their admission that the point of the Crocoduck was to "show exactly what evolutionists believe". No wonder the Crocoduck has become widely symbolic of the fact that evolution deniers tend not to understand even the basic principles of evolutionary theory.[6]

While simply presenting the audience with their homebrew Crocoduck alone would clearly have been stupid enough to make their point, Kirk and Ray actually figured it was reasonable to present two additional creations of theirs — the "Sheep-dog" and "Bull-frog", respectively.[1]

" already name animals which even Ray and Kirk must reasonably know exist.

It goes without saying that the Creationist expectation of a transitional form being akin to "an individual chimaera of two random species" is not even wrong, and stems from their willful ignorance of how evolution even works. As such, the Crocoduck is a perfect example of the straw man fallacy of over-simplifying the opponent's argument — in this case, the scientific view on the nature of the fossil record.

, was far more like a crocodile than a duck, but both crocs and ducks have a mix of primitive and advanced features from their common ancestor, the basal ruling reptile

Just for the sake of argument, a purported Crocoduck (or similar chimaera) would be a most astonishing find indeed. Creationists purport that Crocoduck-type chimaeras are what evolutionary theory rests on. But if such a fossilized chimaera was ever uncovered, it would in fact serve as evidence against evolution as understood by modern biologists.

Hence, the Crocoduck argument demonstrates that Creationists fail to understand the most basic claims made by the theory of evolution, and as such, literally don't even realize that they don't know what they're talking about.

Anatosuchus. This is the real deal!

Various fossil species can be argued to be "Crocoducks", often due to convergent evolution: