From RationalWiki
(Redirected from Fun:McDonald's)
Jump to navigation Jump to search 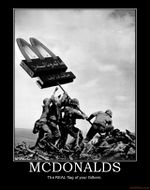 The real interest of America: A Big Mac and fries

The McDonald's Corporation is the world's most notorious supplier of hamburgers. It was founded in its modern corporation form by a multimixer salesman named Ray Kroc, who bought the name from the McDonald brothers.[1] The corporation has generated much controversy over charges including providing unhealthy food,[2] cutting down rainforests,[3] serving coffee too hot to be safe,[4] and the McLibel case where several people were caught up in a legal battle with the giant Goliath McDonald's over pamphlets provided by London Greenpeace (at the time it did not have an affiliation with the larger Greenpeace organization) and only two of them didn't surrender: Helen Steel and David (surprise?) Morris.

Critics claim the fast food giant is the reason why so many Americans are obese, including children and adolescents. [5] However, the corporation claims they are going in the right directions.[6] This includes putting apples in Happy Meals and not marketing hamburgers and fries directly to children,[7] selling milk and juice as an alternative to soda and milkshakes,[8] eliminating trans fats from French fries,[9] and selling salads to adults. Despite these new innovations, critics still claim that McDonald's is a greaseball since hamburgers and fries are still the heavyweights. They also push sugary soft drinks and milkshakes to wash their food down with; this only adds to the total calorie load of a typical meal.

Still, it might be the case that McDonalds is getting unfairly picked on here, being targeted simply due to being the most successful fast food chain and thus the face of the industry. Their food is not healthy, sure, but there are far worse fast food restaurants you can eat at. Your typical Five Guys burger is literally dripping with grease, for example,[10] and a lot of American chain sit-down restaurants such as Cheesecake Factory offer much more monstrous dishes.

In 2013, as their American employees began making noises about wanting a living wage and better benefits, the brain trust at McD's corporate offices began issuing missives via their website to their employees telling them how to budget and spend their money.

Many McD's employees in the US are on public assistance, basically meaning that the federal government is subsidizing McDonald's profits. Many also work two or three jobs to survive. Others rely on parents or siblings for help. Some have even stated that they can't afford to eat at McD's on their McD's salary.[17]

Dragging an old lady through the dirt[edit]

McDonald's is not universally popular outside the United States.

Continuing with their fetish, conspiracy nuts have said McDonald's is part of the Illuminati. A whole Youtube series was made dedicated to it![18]

Is this the place to be closed?

In March 8, 2022, McDonalds announced on twitter that they will shut down Russian operations in response to the Russo-Ukrainian war escalations.[19] Mission failed