From RationalWiki
(Redirected from Fun:PIDOOMA)
Jump to navigation Jump to search

PIDOOMA (the acronym for Pulled It Directly Out Of My Ass. or argumentum ex culo[note 1]) ("argument from the asshole") is the act of arguing by way of flinging everything at the wall and seeing what sticks ad hoc bullshit in a desperate attempt to shore up an untenable argument, with the use of blatant, usually intentional lies.

As a general rule, if something stinks about the argument, there's a good chance it's an argumentum ex culo.

Synonyms: colonic autoextraction methodology, toilet fishing, proctolojustification[note 2]. This is a self-explanatory origin for woo and pseudoscience statistics, estimates, "theories", and, fairly often, evidence, too. As the anus is the very bottom of the gut, many PIDOOMAs originate as "gut feelings." It is creationism from the fundament.

See the main article on this topic: Statistics

A quoted statistic that is a neat multiple of 5 should generally be suspected to be of PIDOOMA provenance, because after all, "88.2% of statistics are made up."[1] Similarly, statistics or results quoted to odd precision are also suspect as they are an example of "spurious rigor." That is, the addition of significant figures or more decimal places are used to make the figure seem more accurate and reliable, when, in fact, such precision is rarely justifiable. An improvement of 82.56% is probably (with a confidence of either 95% or 92.56584%) no real improvement at all. 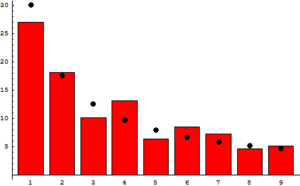 The chart depicts the percentage of countries having the corresponding digit as first digit of their population (red bars). For example, 64 countries of 237 (=27%) have 1 as leading digit of the population. Black points indicate what is predicted by Benford's Law.

While useless to identify a single bogus statistic, large sets of numbers found in nature typically conform to Benford's Law,

Made-up statistics, unlike naturally-occurring statistics, tend to have an even distribution of first digits. Keep in mind this rule only applies to purely quantitative numbers with no upper bound, like "flow rate in gallons per second of the Nile river," and that percentages, by virtue of their cap at 100%, do not conform to this metric.

Conversely, the last digits tend to have a more even distribution as these represent relatively random noise inherent in any real-world sample. Therefore, among large sets of numbers, an over-prevalence of any particular number (usually 7, for some reason) may suggest these numbers were typed up by a human rather than generated by a noisy and messy environment such as reality.

Fans of prophecies are known for attributing new predictions, that they pulled out of thin air, to their favourite "prophet" after their original prediction failed to come true. In a fraudulent attempt to maintain their accuracy, the new predictions will be consistent with events that actually took place. This applies to people such as Nostradamus, Edgar Cayce, and Baba Vanga. Nostradamus was attributed a prophecy of 9/11, however the prophecy was actually only written several years before 9/11, as an example of a prophecy so vague that it can seem to predict to anything[3].

Andrew Schlafly also is a common user of PIDOOMAs, such as his statement that "Wikipedia is 6 times more liberal than the American public.", which he just made up to make Wikipedia look bad.[4]