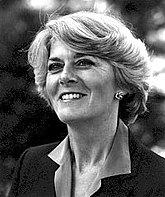 Geraldine Ferraro was Walter Mondale's vice-presidential running mate in 1984. She had been a representative in the U.S. House for six years at the time. She was the first woman to ever gain a slot on the ticket of one of the major US parties.

During the 1984 race there was some controversy over Ferraro's husband's business interests.

In 1999, she showed what a good liberal Democrat she is by signing on as a commentator for Fox News. During the 2008 Presidential Election, she supported Hillary Clinton. When Barack Obama took the lead for the Democratic nomination, Ferraro said that if he were a white man or a black woman, he would have been in the lead.[citation needed]

This politicians-related article is a stub.
You can help RationalWiki by expanding it.
Retrieved from "https://rationalwiki.org/w/index.php?title=Geraldine_Ferraro&oldid=2473584"
Categories:
Hidden categories: