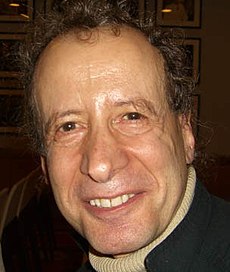 Howard Bloom (born 1943) is an American author, ex-musician and an expert on mass behavior. He published three science books: The Genius of the Beast, The Global Brain and The Lucifer Principle. He is a Jew, an atheist and a Zionist - he has said that makes him a devil three times over for Muslims. The American-Arab Anti-Discrimination Committee accused him of Islamophobia, while multiple legal threats were made towards him. He was interviewed numerous times by TheAmazingAtheist.

This atheism-related article is a stub.
You can help RationalWiki by expanding it.
Retrieved from "https://rationalwiki.org/w/index.php?title=Howard_Bloom&oldid=1833851"
Categories:
Hidden categories: