From RationalWiki
(Redirected from Jesuit)
Jump to: navigation, search 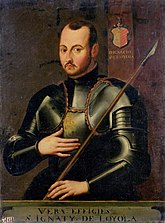 Jesuits also spread disease in the new world, though not realizing it at the time, and killed off native populations. With so many mysterious deaths occurring around them, some natives were wary of Jesuits. The Jesuits blamed these deaths on the natives' pagan religions and converted those who believed them. During the Holocaust some German Jesuits risked their lives to rescue or protect Jews.

With all that in mind, people tend not to like them that very much, some of which will be described in this article.

Distrust of Jesuits, and conspiracy theories about the order, have continued into the modern era. These theories often focus on the Black Pope, portrayed as the real power behind the Papacy and the Church. Not to mention, there are multiple people that accuse the Jesuits of orchestrating numerous wars, assassinations, and other atrocities. These can include the World Wars, the death of Lincoln , and promoting dictators.

The “Jesuit Oath” conspiracy begins with two political candidates running for office in the Seventh Congressional District in Pennsylvania: Eugene C. Bonniwell, a Democrat and a Catholic, and Thomas S. Butler,

a Republican and a Quaker. Bonniwell, who lost the election, attempted to have the Speaker of the House prevent Butler from taking his seat. The House Committee on Elections investigated the matter and submitted HR1523 to the House on February 15, 1913. Congressman Olmsted requested that it be read into the Congressional record.

This committee cannot condemn too strongly the publication of the false and libelous article referred to in the paper of Mr. Bonniwell, and which was the spurious Knights of Columbus oath, a copy of which is appended to the paper.[8]

The reason why this was called the Jesuit Oath was before the oath was used to slander Bonniwell as a Knight of Columbus, the same oath had been pinned on the Jesuits as being the oath they had taken:

I furthermore promise and declare that I will, when opportunity present, make and wage relentless war, secretly or openly, against all heretics, Protestants and Liberals, as I am directed to do, to extirpate and exterminate them from the face of the whole earth; and that I will spare neither age, sex or condition; and that I will hang, waste, boil, flay, strangle and bury alive these infamous heretics, rip up the stomachs and wombs of their women and crush their infants' heads against the walls, in order to annihilate forever their execrable race. That when the same cannot be done openly, I will secretly use the poisoned cup, the strangulating cord, the steel of the poniard or the leaden bullet, regardless of the honor, rank, dignity, or authority of the person or persons, whatever may be their condition in life, either public or private, as I at any time may be directed so to do by any agent of the Pope or Superior of the Brotherhood of the Holy Faith, of the Society of Jesus.[9]

One is left scratching one's head, as the Jesuits are known to be the most liberal of all the sacerdotal orders, constantly getting in trouble over what many consider liberalism.