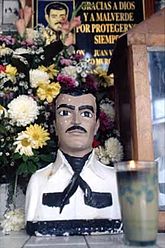 A shrine to Malverde.
No, not that Jesus.

Jesús Malverde (lit. "Jesús Bad-green"; also El Narcosantón or the Narcosaint) is a great example of how mythical, fictional people can emerge from real history and people. Malverde is, depending on who's asked, an angel of the poor, the patron saint for drug dealers, or a legendary but nonexistent hero.[1]

Please mentally insert "allegedly" after every verb in this section. Thank you.

Malverde's life has many, varied, and contradictory paths, all of which share in compassion for the poor. Kinda like some other guy.

Malverde was born on 24 December 1870 as "Jesús Juarez Mazo" near Morocito.[1][2][3] His nickname "Malverde" (bad-green) was given by his wealthy victims, deriving from an association between the color green and misfortune.[3]

At first, Malverde was employed as (pick one):

The 1870s were, for Sinaloa, Mexico, a period of industrialization and great inequality. The rich made even more money; the poor were just as bad or even worse off. Policing was corrupt, as ever, and legitimate ways to advance in the world were few.[1][2]

Malverde began a life of crime after his parents (pick one):

Malverde was el bandido generoso (the generous bandit), who stole from the rich and gave to the poor.[1][2][3][4]

At some time, Malverde (pick applicable):

Malverde was successful until he was (pick one):

Malverde's shrine, in the drug-cartel-heavy city of Culiacán, maintains a constant stream of visitors (many from hours away) bringing candles, photographs of loved ones, and music, each hoping for his supernatural assistance. There, worshipers rub concrete busts of his face and buy ballads written to him.[4]

Malverde's grave was supposedly going to be bulldozed. Yet his supernatural powers prevented any such action:[2][4]

They say all of Culiacán turned out to see the demolition of the pile of pebbles that supposedly marked the place where Malverde was buried. They say, too, that the pebbles began to jump like popcorn and that the bulldozer operator had to get drunk to have the guts to roll over it, and that finally, the machine broke down when it touched the grave.

In reality, no such bulldozing was ever attempted:[2]

José Carlos Aguilar, the lot's owner, says he wants to build a high-rise hotel or office building on the sight[sic], but hasn't been able to find funding or a suitable partner. Still, if he did build on the site, Aguilar says he'd leave aside a corner of the building, or maybe a section of the hotel lobby, for the bandit's tomb. "You can't be inflaming people's sensibilities," he says.

Furthermore, in the original days, when Malverde's gravesite was merely a pile of pebbles, throwing a pebble onto the pile was said to grant the right to petition him for assistance.[3]

Martyrs prove Jesus was a god![edit]

See the main article on this topic: Martyr

Early Christians were convinced deeply enough that Jesus was a god that they martyred themselves for him. Why would they do this, unless he was a god?

Maybe because people get emotional about stuff like this:[2]

Every third night Florentino Ventura can be found sleeping outdoors, guarding the large blue shrine that honors the belief in a lawless man. His faith keeps him there. … He'd been on track for what would have been at least a minor political career. He had been a PRI youth leader and won a scholarship to study political science in Mexico City. He was taking a break from studying law when the diving accident happened. But he gave it all up and, now 36, he's been here ever since. "The Mexican political system is useless. It was false, pure lies," he says. Florentino found more truth in Malverde.

"Thanks to God and Malverde there's something for everyone," [Eligio Gonzalez, "The Apostle of Malverde"] says. "Not much, but something. Little by little we've built this. Before it was just tiny. People have put in a lot of faith. If there's no faith, there are no miracles."

God has appeared to me![edit] 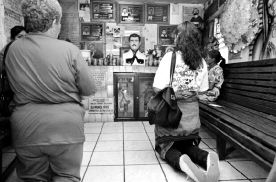 Some people point to personal theistic experiences as proof of god. Yet such experiences also prove Mr. Malverde:[2]

The summer when Florentino was 23, he was working as an oyster diver in Mazatlan. One day he became tangled in his rope underwater. He wrestled with the cord and began to drown. Then suddenly the face of the bandit Jesus Malverde appeared to him. Florentino finally freed himself. He rose to the surface and came immediately to Malverde's shrine to give thanks. From the way Florentino describes it, the experience led to the kind of spiritual catharsis that makes people change their lives.

Corruption of the true religion[edit]

Malverde worship, even though it's less than a century old, has been corrupted shifted significantly. For example, the shrine in Culiacán is quite different from that in Mexico City's Colonia Doctores district, below:[8]

[A] younger woman, dressed in black, flashes out of a doorway. She balances two fake skulls in her right hand and clasps a skull-topped walking stick in her left. It's 7:55 p.m. in Colonia Doctores — time to pay homage to Jesús Malverde, the patron saint of Mexico's narco-traffickers. … [M]ore than two dozen worshipers gather, some drifting away from Pulido's sidewalk kitchen to kneel before the shrine her family built. It stands more than 10 feet tall, a glass box the size of a large outhouse. Lantern-style lights illuminate the life-size statues inside. Worshipers gaze on the plastic portrayals of Malverde, a blue bandanna peeking out from beneath a cowboy hat jauntily perched on his head, and La Santísima Muerte, the skeletal patron saint of death.

The Mexican religious traditions surrounding La Santísima Muerte and Malverde have become intertwined. It's not hard to imagine such a thing occurring elsewhere.

People have also managed to use Jesus Jesús for their ends, especially narcotraffickers. Patrica Price:[3]

Narcotrafickers have strategically used Malverde's image as a 'generous bandit' to spin their images as Robin Hoods of sorts, merely stealing from rich drug-addicted gringos and giving some of their wealth back to their Sinaloa hometowns, in the form of schools, road improvements, community celebrations.

(Lack of) evidence of existence[edit]

The body of Heraclio Bernal

Strangely, despite all this attention, there's very little evidence that a Malverde of these exploits existed.[2][4][3][6]

Instead, according to historians, he was probably an amalgam of two bandits, Heraclio Bernal

Interestingly, both Bernal and Bachomo contain elements of different stories of Malverde's life.

People have believed despite this lack of evidence for nearly a century. Kinda makes you wonder…