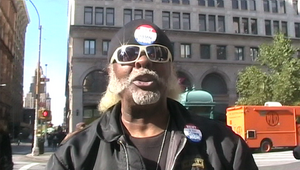 Jimmy McMillan is a perennial mayoral and gubernatorial candidate from New York and the founder of the Rent Is Too Damn High Party (alternately, Rent Is Too High or Rent Is 2 Damn High depending on how many characters are allowed on the ballot that year). He is known for his Colonel Sanders facial hair and wearing a black glove on one hand. He is also a karate expert. McMillan announced a 2012 presidential run on the Republican ticket[1], dropping out without appearing on a single ballot. He also ran briefly in 2016, dropping out before any contests were held and eventually endorsing Donald Trump[2].

In 2010, he released a single and music video called "Ain't Nothing To Talk About.[3]

Jimmy's one vote in the 2010 election

McMillan has been criticized as a one-issue candidate for his political stance. He rightfully denies this, as his position on civil liberties for footwear makes clear that he can have a cross-demographic appeal.

Is his rent too high?[edit]

No one really knows. The New York Times asked the question, to which he responded a number of different ways. He originally told the Journal earlier that he paid $800 a month in rent on his Nostrand Avenue apartment in Flatbush, Brooklyn. He stated to the Times that he has paid no rent since the early 1980's after falling behind on his rent paid for by disability checks from the postal service. Largely because his landlord's family loves him, forgiving his past/future rent, as well as performing maintenance. He stated he did pay his son's $900 a month rent on a rent-stabilized apartment on St. Marks Place in the East Village.

When asked about it again, he stated "I didn't intend that to be a factual statement" "Don’t look for anything I say about my living space to be true".[5]