Homeschooling has a storied history, for better or for worse.

Homeschooling is just what it sounds like – children being schooled at home, usually by their parents. Sometimes parents from two or more families will share the duties of schooling their children. This is done to access the strengths of each parent as a teacher – one may be a mathematics whiz, another may be an English major, and so on. It is also done to give the parents a break from teaching.

Homeschooling can be a good option for kids whose needs aren't met by a traditional school. But if the education is low-quality, or if they are too isolated from the outside world, they may not be adequately prepared to become adults.

In England and Wales, the Department for Children, Schools and Families (DCSF) lists the following common grounds for parents to choose homeschooling ("elective home education", in DCSF parlance):

Some of these reasons make sense. Others... not so much.

An Australian study of 676 children in homeschooling found that the majority of them were homeschooled because the school had failed to properly accommodate a developmental difference (like giftedness or a disability). Only 19% were being homeschooled for lifestyle reasons.[1]

The most common model for homeschooling requires one parent, typically but not always the mother, to stay home with the kids and teach them from books specifically designed for homeschooling. This means that "home school parents are, by definition, more heavily involved in their children's education [than] public or private school parents. Home schools can easily pace and adapt their curriculum; public and private schools typically have a mandated scope and sequence."[2]

Homeschooling parent/teachers are not held to the same standards as public school teachers in various US states (though, in fairness, the teachers at Catholic and other private schools generally aren't either), New Jersey being one example. While many have college degrees, those degrees may lack any relevance to a child's school curriculum (business administration, theology, basket-weaving, for example). But as long as their children/students pass standardized tests, few people raise questions about this disparity — no apparent harm, no apparent foul.

Despite this, studies in the USA (which mention in their very abstract that they are not controlled experiments, and also note that homeschooling parents tend to be far more affluent than average) demonstrate that "at every grade level, the mean performance of home school students whose parents do not have a college degree is still much higher than the mean performance of students taught in public schools."[2] In fact, "having at least one parent who is a certified teacher appears to have no significant effect on the achievement levels of home schooled students. The test scores of students whose parents had ever held a teaching certificate were only three percentile points higher than those whose parents had not — in the 88th percentile versus the 85th percentile."[citation needed]

That is a pretty cool trebuchet.

There are various reasons to accept homeschooling aside from being a far-right religious nutter. In the UK, homeschooling is stereotypically associated with left-wing radicals, usually atheists, who consider conventional schooling to be capitalist propaganda.[citation needed] Some parents may pursue careers in which they are rarely settled in one location, such as career military officers and touring musicians, and find homeschooling their children to be more practical than enrolling them permanently in a school.

In other cases the reasons are determined by the interests or abilities of the child. For example, parents who believe their child to be especially gifted, or wish them to be, may feel that the child could not reach their full potential in a public (or even private) school, and instead educate them, often intensively, at home. Some are "child prodigies" with a particular skill, such as musicianship or athletics. These inevitably take a lot of practice time, and cannot easily fit around a school schedule. Sometimes these children, or their parents, have little interest in pursuing other educational studies. Similarly, a child may be more interested in learning a craft than in pursuing an academic education. However, if the majority of homeschooling time is given over to a particular subject, the child may miss out on a balanced general education, which could disadvantage them later in life.

Kids with disabilities may be homeschooled. A rotten school district or a really good parent could mean that homeschool is a better option. (Autistic kids, for example, are at risk of bullying victimization, and have a lot of enthusiasm for learning related to their passionate interests. A specially-tailored curriculum might be perfect for them.) Not every school district offers quality special education services, either, and some disabled kids face discipline for being "difficult" just because adults refuse to understand them.

In a few cases, a student's reasons for being homeschooled may relate to negative or traumatic experiences in a school environment, such as bullying or even assault, leaving them feeling unsafe at school.

A much rarer reason for homeschooling is a medical one: some students have severe health problems that make exposure to contagious diseases hazardous. For example, an immunocompromised child might not be safe around kids whose parents opted out of vaccines. A child who has developed mildew or mold allergy due to sick building syndrome, is likely to benefit from homeschooling.

Homeschooled kids often win contests such as spelling bees and math contests. However, it's unclear how typical these few prize winners are among the total population of homeschooled students. For instance, because many of today's homeschooling materials are Bible-centric,[3] it's a sure bet that some of those student's homeschool science education lacks any real value. The Biology Blue Ribbon at the science fair isn't likely to go to a child who makes a diorama of Adam riding a dinosaur.

It is also quite possible that these shining examples of success come from other groups besides fundamentalist Christians who homeschool: those hippy types who don't want their children indoctrinated by "the establishment" to become capitalist tools (note the irony), or parents who feel that they can provide better facilities for their gifted or disabled children. (Some disabilities, such as autism and ADHD, can come with strengths that may help kids build the skills necessary to win competitions.) Also, there is much less of a need for a balanced education in for a homeschooled child, so they can focus an inordinate amount of time on something of little actual educational value, such as learning how to spell obscure words. Regardless of the reasons, winning a competition involves impressive practice and skill, and that shouldn't be diminished.

People who question the claim that "the homeschooling industry has such a lock on the information about homeschooling" will have it tough to find anything but positive feedback. (After reading some of it, you might think "propaganda" is more accurate.) If you enter the word "homeschooling" into a search engine, followed by words like "myths," "horror stories," "cons," etc., you will be greeted by hundreds of links dispelling myths, horror stories and cons as lies. Websites with legitimate stories about the negatives of homeschooling are almost impossible to find. This lack of critical information raises questions among those seeking information about homeschooling. It also raises the possibility that there are no "horror stories", but the likelihood of nothing going wrong for anyone is nil.

The Coalition for Responsible Home Education supports quality homeschooling, but is also critical of homeschool abuses and the often lax government oversight by many US states. Abuses can include inadequate education, child abuse, child labor violations, withholding of academic documents, and medical neglect.[4][5] "Twenty-five states do not require homeschooled students to ever take a standardized test. Almost half of the states that do require testing allow parents to avoid this requirement either by claiming a religious exemption or by operating as a pseudo private school."[6]

Collective homeschooling and the fight against government regulation and oversight[edit] 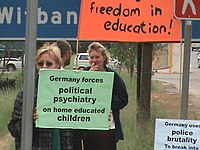 Homeschool classes aren't necessarily just one child being schooled at home by their parents. For instance, Andrew Schlafly, the son of anti-feminist political activist Phyllis Schlafly, has around 58 in his homeschooled history class. If you are wondering how one man could accumulate 58 "homeschooled" students, the answer goes by the term collective homeschooling. That is, students gather at the home of a parent/teacher for class. Usually, such people are defined as private tutors — a job title that requires a teacher's certificate in some states. Many homeschool advocates constantly fight against all such government efforts to regulate homeschooling, including:

In much of Europe, homeschooling is either illegal or is only allowed subject to restrictive conditions.[9] In some countries this is due to a view that children's rights to participate in society through schooling override parents rights to control them; in others (e.g. Sweden), to the idea that the state apparatus and certified teachers are better equipped to deliver unbiased quality education than parents;[10] and in still others, to fears that extremists might use homeschooling to indoctrinate children (e.g. in Germany it is prohibited for fear that covert neo-Nazis might make use of it). In the UK, homeschooling is legal but rare, and is stereotypically associated with left-wing radicals.

Alpha Omega Academy is not to be confused with Alpha-Omega Institute, which also offers a homeschool program.

For an example of an actual homeschool and the things that it teaches, take a look at Alpha Omega Academy. AOA is accredited, and on the surface seems to have a perfectly viable (if overtly religious) curriculum.

However, look beneath the shiny exterior and you'll find that students at AOA are being taught to believe that science is wrong when it doesn't agree with the Bible. The biology curriculum is informed by the work of Ken Ham, asserting that the Earth *must* be 6,000 years old,[12] or reinforcing the usual anti-evolution rhetoric.[13]

Topics like history and English are taught in the most bare-bones fashion possible while still maintaining the same religiosity that you see in science classes. A Bible class is required to graduate from the school, and health class is handled about as well as you'd expect it to be.[15]

The online nature of the school, combined with the isolationist mindset of many parents who homeschool their children, means that many of the students have limited social contact, which makes it difficult for them learn how to question their beliefs (or their education), inhibits the development of critical thinking, and makes it difficult for them to get help if they realize that they are being denied a decent education or experiencing other forms of abuse.

It's not all bad, though. For an example of a secular homeschooling curriculum with all the accreditation one could ask for (per the Committee on International and Trans-Regional Accreditation), which was the first and is still considered (at least by the United States Foreign Service, which officially recommends it) to be about the best, see the Calvert School