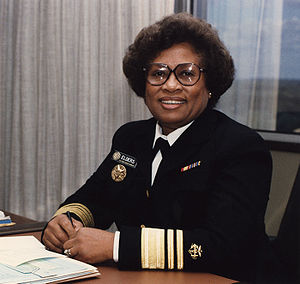 Joycelyn Elders (born 1933) was the Surgeon General of the United States from 1993 until 1994. She was controversial among the wingnut set because she supported comprehensive sex education, and once had the audacity to suggest that such a program might teach children that self-abuse was acceptable. This led to such an outcry that she was dismissed by Bill Clinton. She also advocated for the legalization of drugs.

There was an episode of the TV show Sliders where the main characters visited a universe in which the population of the world was maintained at 500 million, and she was president.

Isn't it weird watching old people talk about sex?
This medicine-related article is a stub.
You can help RationalWiki by expanding it.
Retrieved from "https://rationalwiki.org/w/index.php?title=Joycelyn_Elders&oldid=1505051"
Categories:
Hidden category: