From RationalWiki
(Redirected from Luddism)
Jump to: navigation, search

Frame-breakers, or Luddites, smashing a loom, as depicted in 1812

The Luddites were a protest movement by workers during the Industrial Revolution, who expressed their objections to getting displaced by technology, industrialisation and capitalism by sabotaging or destroying machinery. With today's societies being decidedly better off the world over, Luddites can look rather silly, at least if one sees their objections being to machinery itself. A more accurate interpretation of their actions would be as protest of the way capitalists were using machines to deprive the (pre-union) workers of their livelihoods.

A contrarian could argue that, whereas the Luddites campaigned for unemployment compensation and re-training for those workers displaced by new machinery, they were amongst the most forward-thinking and progressive people of the Industrial Revolution. However, their extremist methods brought the contempt of wider society, and likely discredited their case completely. There is little evidence that their efforts were conducive to establishing workers' rights in Victorian Britain. Thus the term "Luddite" today is one of reproach, and does not carry connotations of being socially or economically progressive. 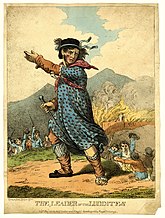 An 1812 caricature of Ned Ludd

According to folklore, the movement was inadvertently started by an English "simpleton", Ned Ludd

who in 1779 destroyed some stocking frames, fearing the loss of his job. His name subsequently became associated with the "Luddite Riots" of 1812 to 1818.[2]

The Luddite's tool of choice became known as "Enoch's Hammer".

Ned Ludd evolved into the quasi-mythical character "General" (or "King") Ludd, the leader of disaffected workers across England, a kind of Robin Hood of the Industrial Age. Arguably, the original Luddites were little better than terrorists, using violence to advance an extremist and retrograde agenda and to spite progress. Such has always been the way of fascists and other anti-modernist fundamentalists, but non-Randroids understand there was legitimate reason to be fearful of oppression, and take a more sympathetic view. The British government responded by making industrial sabotage a capital crime, and many Luddites were sentenced to execution or penal transportation.

"By Grabthar's hammer, by the suns of Warvan, you shall be avenged!"[4] A modern Enoch's Hammer in action; take that, Microsoft!

The term is now commonly applied to those who object to industry and technology on environmentalist grounds, rather than economic self-interest. It can also be applied to ideologies which are perceived as opposing modernisation and scientific progress in a more general sense.

One hopes that those who use the internet as a medium to inveigh against technology are aware of the irony of doing so (q.v. anarcho-primitivists like John Zerzan and Derrick Jensen, who regard dispensing their precepts to a wide audience as more important than pointless personal purity; sort of using technology in a way that will quicken its disappearance – a more extreme example was the Unabomber). Otherwise, they've likely fallen into the territory of absurdity.

It is also a common meme for paleoconservatives when they rail about the internet or other such nonsense.

Many transhumanists describe their critics as luddites.[5]

is a philosophy that resists modern technology. Hard green, anti-science movement, anarcho-primitivism, Labor unions, survivalism, anti-materialism, anti-globalization, neoreactionary, hobbyist groups[6] and Low-Tech Magazine[7] often have this philosophy integrated into their worldview despite having clashing political views. Putin, surprisingly, has luddite tendencies as he doesn't seem to use a smartphone, internet, nor social media,[8] while Donald Trump does use social media, despite being technophobic himself.[9]

The term Luddite was adopted by economists to refer to the false assumption that increasing the efficiency of production would inevitably lead to a reduction in labour while holding production constant. Thus, jobless, the labourers would be forced back into serfdom and poverty. Of course, this is not what happened in Europe and North America during the Industrial Revolution. Instead, it would be more accurate to say that the labour force remained constant, and productivity increased accordingly (this was the basis for economic growth during industrialisation).

In a truly post-scarcity society, it could be argued that technological unemployment

would not be a problem, since large-scale economic automation could make human labour redundant, and humans would have effectively unlimited leisure time.[10] Thus, twentieth-century economists like John Maynard Keynes imagined a future in which working hours could be greatly reduced.[note 1] While working hours have been in decline since the late 1800s as productivity has risen,[12] that vision of the future has not yet come to pass. The trade-off between economic growth and allowing the population a large amount of leisure time has been a difficult one, and the optimal distribution of resources in society is a problem that is still far from being solved.

This fallacy shares some common assumptions with the broken window fallacy, namely that the point of work is to create jobs for people to do, rather than make things that are useful. It's possible that this notion derives from the religious idea of work.