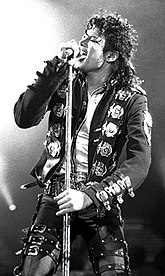 Billie Jean, you're not my lover...

Michael Joseph Jackson (August 29, 1958–June 25, 2009) aka the King of Pop was an extremely popular, extremely eccentric, and extremely rich American singer–songwriter and entertainer. He dominated pop charts during the 1980s and 1990s. His death almost broke the Internet.[1][2] His originality and quirkiness charmed much of the world and a fan cult developed around him and his music that still exists today. He was a controversial figure with his cosmetic body alterations, his debatable love interests/child-rearing and confusing shenanigans though it was mostly seen as the antics of a lovable oddball. Recent detailed revelations of Michael's alleged disturbing behavior have challenged his legacy.

Michael Jackson was accused of child molestation on several occasions. The first one was settled out of court, fans of Jackson speculate this to be an extortion attempt by the accuser's father (who committed suicide after Jackson's death). This allegation, however, has most of the graphic details of the abuse coming from the mouth of the 13-year-old accuser,[3][4][5] who has remained silent since his family received upwards of $20 million, $15 million of which went directly to the child's trust fund, in January of 1994. During the first investigation, two more boys disclosed allegations of abuse to law enforcement, one of whom was the son of a former maid at Neverland Ranch, he also received a multi-million dollar settlement from Jackson. Law enforcement decided that the third boy's previous statements would have aroused complications in the prosecution.[6]

One of Jackson's former child friends, Wade Robson, was a star witness in the defence during the 2005 trial. In 2013, further doubt was cast over the 2005 verdict when Robson himself came forward to admit that he had been molested by Jackson for seven years. Robson claimed that he felt like an active participant in the sexual activity with Jackson, and that it wasn't until he had a son of his own that he realised just how messed up his own childhood was. Robson filed a civil suit against Michael Jackson's estate in May of 2013. In 2014, another former child friend of Jackson, James Safechuck Jr., alleged that he was also abused by Jackson as a child. Safechuck notably appeared in a Pepsi commercial with Jackson in 1987 before becoming his companion during the tour for the "Bad" album. Their friendship at the time was incredibly close, to the point where Jackson would frequently drop by Safechuck's family in Simi Valley to spend time with him. Notably, in 1989, Jackson was spotted in Simi Valley on CCTV footage in disguise, shopping for jewelry with a young boy.[8] Safechuck's 2015 amended complaint confirms that he was in fact the boy on with Jackson during that incident. Safechuck's claims go so far to allege that Jackson would buy jewelry for him, and even performed a mock wedding ceremony with a wedding ring included.

Both Safechuck and Robson repeatedly struggled to bring their cases to trial based on statute of limitation laws. In 2019, both men featured in a documentary directed by Dan Reed called "Leaving Neverland", putting the allegations back under a spotlight.[9] However, many people still stand by him and any allegations do not make him guilty as nothing has ever been proven, although the documentary caused several radio stations to drop his music and The Simpsons episode that featured him as a guest star was pulled from circulation. Both Jackson's die-hard fanboys and those who insist that he was guilty and that any record of him should be destroyed have the same levels of insanity. He was great, but not a deity.

In 2020, a change in the statute of limitation laws allowed for Robson and Safechuck's cases against Jackson's estate and corporations to proceed to a trial. Both cases are currently in their pre-trial phase.

For a while, he was married to Scientologist Lisa Marie Presley (Elvis' daughter). How scientological he was is anyone's guess.

Jackson also fell into the clutches of Uri Geller, the spoon bender. And was known to have at least dabbled in oxygen therapy.[10]

In a particularly sickening scene, Jackson pretended to be Jesus at the Brit Awards, posing in a crucifixion scene with small children around him. Until Jarvis Cocker put pay to the stunt.

At least for some time after his death, tons of fans believed that he was still alive and in hiding.[11] Among more deranged 'professional' conspiracy theorists, there seems to be a consensus that Jackson was murdered by the Illuminati.[12][13][14] Combine the two and you'll have conspiracy-savvy fans who believe Jackson faked his death to 'escape' the Illuminati.[15] Other conspiracy theorists, the more conservative, argue that Jackson was a pawn/false idol of the Illuminati and that the Illuminati used his death to divert people's attention from more important issues, as they do with the death of every big-name celebrity.

According to "VigilantCitizen," a prominent Illuminati-conspiracy blogger, Jackson was becoming increasingly outspoken on the shady dealings of the music industry in his last years. "Indeed, it seems the man who was the ultimate Illuminati slave was attempting to break free."[16]

Of course, some would have you believe that, like Elvis, he ain't dead at all.[17]

Videos have been going around on YouTube about a "phone call" Michael Jackson had with a friend of his.[18] The call is alleged to have been made the night before his death, and is interpreted by conspiracy theorists to be Michael knowing he was going to be killed (although they don't need something as minor as a phone call to already work that out).[19] Some believe Paris Jackson's suicide attempt was a way to warn people about the Illuminati. [20][21]

There have been multiple of "sightings" of Michael Jackson since his death.[22]

There have been multiple by twoofers that Paris Jackson, Michael Jackson's daughter, shortly after attempting suicide, that she was using her twitter account and Instagram to warn people about the Illuminati.[23] This caused Paris to tell people that she does not use any social media.[24]