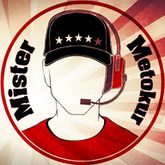 The avatar. Looks like a mixture of the Scout from Team Fortress 2 and Slender Man.

Mister Metokur (1981–) (a.k.a. Jim, a.k.a James Patrick O'Shaughnessy)[1] is a far-right fascist YouTuber and internet veteran who makes video versions of 4Chan threads. When Kiwi Farms is on your side, you know you're doing something right.

Vee says the N-word, Metokur has an issue with it:[2]

Vee: I'm sorry that you're part of the Reddit part on the internet that can't handle harsh words.

Mister Metokur: I gotta draw the line at blatant racism. I believe that people should be judged as individuals not as a collective, Vee.

Although he did say the word "nigger" earlier in the chat.

Metokur is clearly against pedophilia from his reaction to the Facebook pedophilia survey controversy.[3][4]

Metokur is against school shootings and says that schools shooters do it for fame. As a result, Metokur asserts the public should make fun of school shooters to taint the social status.

This video is definitely something. Apparently all Civil Rights Activists are ideological allies to The New Black Panther Party, a deeply racist antisemitic organisation and bastardisation of the organisation it stole its name from.[6][7]

In the video, Jim shows screenshots of people who were "a little too uppity", with conversations such as:

Being gay is a disease[.]

Clearly, these individuals had no right to be banned.

SJWs and freedom of speech

Social Justice Warriors in this context between these groups working towards this end goal of censorship are what I like to call the "useful idiots". See, the government wants control. They may call it security, but they want control. And corporations, again very straightforward, they want to make money. They have two very defined purposes, and they are beneficial to themselves. The third group, the useful idiots, want to sanitize the Internet. They want to censor it, to create a safe space to protect their feelings. Hearing what other people think offends them. And what better way to stop being offended than to silence everybody else. So this plays into the goals of the first two groups. So while the Social Justice Warrior thinks, "Oh, isn't it great that the government's getting involved? Isn't it great that these corporations and websites are getting involved?" They're mistaking this as altruistic. When it's really self-serving. Those first two groups are doing it because it serves them. Not because it serves the greater good. But to a Social Justice Warrior they're too blind to see this. We've seen over the last five years, specifically from this one group, these SJWs, a push to censor everything. Can you name one website that does not now have an amended terms of service agreement about what you can say, what kind of avatar you can use, what kind of name you can use? Facebook has proper pronouns. Twitter now shadowbans you. YouTube now restricts the content you can upload. League of Legends is getting rid of people they deem toxic. It doesn't matter what platform it is. They have influenced all of them. And it is always the same people. Notice who went before the UN. Who was at the Google talks? Who is friends with people who work at Twitter? It's the same names that popup again, and again, and again. People like Anita Sarkeesian, Zoe Quinn, Randi Harper. These are names that are attached to this movement, and it's sold to you as being for your benefit. They're going to make the mean, icky people go away. Somebody said "nigger". Get rid of 'em. Somebody said "kike". Get rid of 'em. And to you that may sound great.

Jim establishes a slippery slope if SJWs get rid of the far-right:

You might say, "Jim, you're an asshole. I've looked at your videos. You say horrible things. I've heard you say racist and sexist comments. You made fun of people. You trolled people. Why should anyone care what you have to say?" Well you should care because when my form of extreme speech is gone, yours becomes the extreme speech. It is on a downward spiral towards the the lowest common denominator. They will find more and more things to be offended by. And they love to be offended.

Jim covers stupid drama about the SCP Foundation forcing pride month, however, Jim seems to be very favorable to 4chan:[10][11]

We've made our website free by purging wrongthink. 4chan may have created this, but they're toxic. So let's get rid of them. That's a real Reddit mindset.

Jim created the shock video "Transtastic Tales Episode 1: How The Sausage Is Made" featuring a MtF sex change while openly mocking transition surgery.[13]

Metokur uses a variety of alt-right/edgelord vocabulary and other lovely words, including:

This article is a stub.
You can help RationalWiki by expanding it.
Retrieved from "https://rationalwiki.org/w/index.php?title=Mister_Metokur&oldid=2144711"
Categories:
Hidden category: