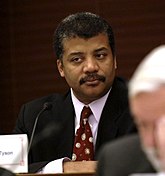 Neil deGrasse Tyson (1958–) is an American astrophysicist and public intellectual. Tyson is one of the most prominent advocates of science and science education in the United States today. He is also a ginormous dingus on Twitter, including telling kids Santa isn't real right before Christmas.[1]

Tyson attended public schools before going on to earn a BA in physics from Harvard University and a PhD in astrophysics from Columbia.[2]

Legend has it Tyson was instrumental in downgrading Pluto to dwarf planet status. However, this is vehemently denied by Tyson.[3]

Tyson met the famous astronomer Carl Sagan while in high school, and credits him as an important influence. Tyson says that Sagan suggested he attend Cornell University. Tyson describes something of his experience with Dr. Sagan in the first episode of the 2014 television series Cosmos: A Spacetime Odyssey. Tyson, as host of the series, reprises the role of Sagan from the original 1980 series: Cosmos, A Personal Voyage. Near the end of the episode Tyson casually presents Sagan's 1975 desk calendar to his audience. Written in, on a day in 1975, one might see the name "Neil Tyson". The renowned astronomer had invited Tyson, a Bronx high-school student interested in astronomy, to spend a day with him in Ithaca. Tyson reports that after their day together Dr Sagan drove him to the bus station, and out of genuine kindness, offered to put him up for the night if his bus didn’t come. Dr. Tyson said: that day "I learned from Carl the kind of person I wanted to be."[4]

In 2014, Tyson hosted a sequel to Carl Sagan's Cosmos: A Personal Voyage, titled Cosmos: A Spacetime Odyssey.[5] Unfortunately for viewers and historians all over the world, Tyson never decided to pursue a minor in history, so he is prone to gaffes like the myth that people in the 'Dark Ages' didn't know the Earth was round[6] or that lead pipes killed the Romans.[7]

He has also hosted the show NOVA ScienceNOW on PBS, which discusses recent topics in science.[8]

He has also made frequent appearances as a guest on popular television shows, including The Daily Show, The Colbert Report, and Real Time with Bill Maher.

In an interview on MSNBC, Tyson expressed his worry that we might be witnessing the "unraveling of an informed democracy."[9]

Despite frequent claims that he is an atheist,[10] Tyson professes to being an agnostic (particularly disliking the "in your face" attitude of New Atheism), stating: "The only 'ist' I am is a scientist."[11] Blasphemy!

However, he still professes methodological materialism as necessary to scientific advancement:

Tyson is well-loved by the Internet, and is the driving force behind a popular meme sarcastically calling out Internet tough guys.[13]

Tyson also qualifies for this himself, as he was an accomplished Greco-Roman wrestler. He went undefeated in high school and served as the captain of the Harvard wrestling team.[14]

Neil is also known for occasionally battling pseudoscience, and was targeted by rapper B.o.B. in January 2016 after Tyson responded to erroneous statements the rapper had made in which he claims the Earth is flat. After B.o.B. wrote a song aimed at Tyson, Tyson and his rapper nephew Stephen responded by releasing a song titled "Flat to Fact", which debunked every point made by B.o.B. Tyson also appeared on The Nightly Show, where he stated in response to B.o.B., "It's a fundamental fact of calculus and non-Euclidean geometry. Small sections of large curved surfaces will always look flat to little creatures that crawl upon it… And by the way, this is called gravity", dropping his mic.[15]

Tyson is known for embellishing his stories and making fallacious factual claims. This has resulted in at least one edit war in his Wikipedia page between the regular editors who preferred not to take sides and some of his fans who wanted to safeguard his reputation.[16]

For eight years Tyson gave an account of President George W. Bush's 9-11 speech where Bush "attempted to distinguish we from they."[17] When Bush's actual speech was a call for tolerance and inclusion.[18] It turns out that Tyson conflated Bush's eulogy for the Space Shuttle Columbia astronauts with his 9-11 speech. However in neither speech did Bush attempt to distinguish Christians from Muslims.

At first Tyson was adamant his eye witness account was accurate. However with some arm twisting he admitted his error and apologized to Bush.[19]

Tyson tells a story about Sir Isaac Newton where a friend asked Newton about elliptical orbits. Newton went home, invented integral and differential calculus and the returned two months later with the answer. And then Newton turned 26.[20] Edmund Halley's question about elliptical orbits is famous and well documented. When Halley visited Newton at his home in Woolsthorpe, one of the topics they discussed was whether or not an inverse-square law gives rise to elliptical orbits. Newton confidently said yes, and stated that he proved it, but could not find his proofs. He promised Halley he would find them and publish his findings, which he did.

This conversation between Halley and Newton occurred in the summer of 1684.[21] Newton was born in late 1642 according the Julian calendar or early 1643, according to the Gregorian calendar, which we now use. It seems Newton was a little older than 26 when this happened.

Tyson also credits Newton with discovering the laws of optics.[20] While Newton did demonstrate white light can be split by a prism, creating a rainbow, and studied Newton's rings, he did not discover the laws of the optics. Uncovering these laws had been going on for millennia prior to Newton and laws were discovered by many individuals.[citation needed]

He also stated there are five orders of infinity.[22] This is not true. The greatest order of infinity does not exist.

Tyson accused the New England Patriots of cheating by under inflating their footballs. However, Tyson plugged gauge pressure into the ideal gas equation instead of absolute pressure.[24] This was a serious and public accusation and Tyson had plenty of time to review his physics and check his work. Another noted scientist who is not a Patriots Football fan to have made false statements about Deflategate is Bill Nye,[25] who also dropped the ball.

In May 2016, Tyson tweeted: "If there were ever a species for whom sex hurt, it surely went extinct long ago."[26] This simplistic view of evolution is questionable, and indeed there exist some examples of species having sex that can involve pain, body damage, or death. Wired compiled a list of candidates in response to Tyson's tweet.[27] Less seriously, Tyson also tweeted, "If Batman wants so badly to be a bat, he might be more intriguing if (like Marvel’s Daredevil) he were also blind, like a Bat."[28] But bats are not blind, and their sight can be up to three times better than that of humans.[29]

In 2018, Tyson received wholly unsubstantiated allegations of "sexual misconduct" caused by a blog post published on Patheos.[30] He was investigated by Fox and National Geographic Networks, which broadcast the show Cosmos.[31]

After these accusations, Fox Entertainment Group and the producers of the television series "Cosmos" said they were investigating the celebrity astrophysicist.[38] Tyson denied the accusations[39] and said he would cooperate fully with an "impartial investigation."[36] No evidence for any of these accusations has been presented.[33] Tyson was eventually cleared and Cosmos would premier in fall of 2020.[40]