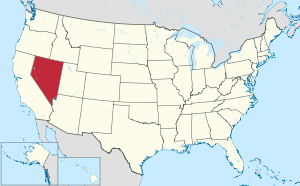 Despite being near California, Nevada is largely barren.

Wild horses couldn't drag me away?

Nevada is an immoral, arid quadrilateral of land in the southwestern United States. It is essentially Las Vegas with a huge chunk of empty radioactive desert stuck on top. Nevada was used for above ground nuclear bomb tests because it is mostly uninhabited.

This patch of parchland is notorious for several reasons:

Nevada Territory was once a much smaller area than was eventually admitted to the union as the state of Nevada. During the American Civil War, it was deemed important to admit a new non-slavery state or two to the union, Nevada's silver deposits were needed to finance the war, and neighboring Utah Territory was rumored to be a hotbed of secessionist sentiment by Mormons who wanted to take advantage of the Civil War to secede from the union and start their own country, Deseret. A large chunk of western Utah Territory was added to then-Nevada Territory to form the new state (take that, Mormons!). Nevada was admitted without having the required number of residents at the time to form a new state.

Okie, here's what you do. Git yerself a pan. And an old Filson hat. And a pick. And a mule. (The mule is optional.) Find yerself a crick. Pretend it's 1870 and you're an old prospector. Start panning for silver and...hey wait a minute, that's gambling, isn't it?

Mount Charleston is a nice snowy, cool, forested getaway from the oppressive heat of Las Vegas. Don't bother trying to buy a home up there though, because if you have to ask how much one costs, you can't afford it.

Blue Diamond has 282 hippies and about 5000 feral donkeys.

Henderson, which has gone from "Hendertucky" (from the influx of Southerners into the 1990's) to the massive suburban sprawl it is now, actually has a historical museum that isn't part of a casino.[note 2]

Boulder City is a great place to sit in your backyard and peer down on Hoover Dam Boulder Dam Hoover Dam, where with the aid of binoculars you can ogle tourists and keep a close watch out for any terrorist activity. The dam has something to do with Herbert Hoover, but we're not sure what. If you take a dam tour, make sure you keep up with the dam group and take all the dam pictures you want.[note 3]

Nelson is south of Boulder City, which is a great place to hide out from the New World Order (it did in fact function as such a hideout during the Civil War for both Confederate and Union troops); a little further south is Searchlight, whence comes Senator Harry Reid, the former leader of the Free World.

South of Searchlight can be found the thriving hamlet of Laughlin, best known for the occasional shootout involving the Hells Angels.

Squirrels, unfortunately, quickly find the hot dry climate and the lack of trees inhospitable and move on to more inviting areas.