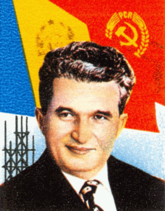 One of Ceauşescu's personality cult images from a 1987 stamp.

Nicolae Ceauşescu (1918–1989) was batshit crazy the ruler of communist Romania from 1965 to 1989, and was considered eccentric and tyrannical even among the rulers of the Eastern Bloc. The closest equivalent of him is Kim Jong Il, and like Kim, Ceauşescu formulated the combination of orthodox Marxism-Leninism with extreme nationalism, appropriately called National Communism.

Ceauşescu came into power in 1965, and was initially seen as a reformer who became popular with Romanians and the West when he gave a speech denouncing the 1968 Soviet invasion of Czechoslovakia. This won him praise from Western capitalist states, including ardent anti-communist Richard Nixon, as well as by China and North Korea, non-aligned communist states who also opposed the Soviet invasion. Ceauşescu was soon taking large loans from the West, and at home he set out to imitate China's Cultural Revolution and North Korea's nepotist personality cult. He created a personality cult around himself and his wife, Elena Ceauşescu. Elena was an uneducated peasant but was promoted to the people as a scientist with a Ph.D. in chemistry.[1]

Among the tenets of National Communism was the heavy promotion of Romanian nationalism, and since Romania was largely agricultural and lacked the industrialization of its neighbors, nationalism provided a bigger draw for the large rural population. To build the nationalist mythos, Ceauşescu also rehabilitated pre-WW2 era fascist dictators such as Ion Antonescu, who was rebranded as a "misunderstood patriot". Concurrently, Ceauşescu also promoted anti-Sovietism and anti-Slavism, and found solidarity with non-aligned communist states such as China and North Korea.

Ceauşescu even resuscitated the legend of Dracula for the purpose of stimulating the tourist trade and Romanian nationalism. At the same time, he badly mistreated the large Hungarian minority and was nicknamed "Draculescu" both within fellow communist state Hungary as well as Hungarians in general. This mistreatment would eventually contribute to his demise, but not until December 1989.

During the 1980s Ceauşescu decided to quickly pay off Romania's debts to the West by ordering the mass export of goods from the country and putting Romanian people on a severe austerity program. While food, fuel, and electricity were strictly rationed and Romanians were living at barely subsistence level, Ceauşescu was also ordering the demolition of blocks of houses, evicting the residents, and replacing them with apartment buildings. At this time a pro-natal policy of enforced large families was in place which people could not support, and his all added up to a humanitarian disaster. Ceauşescu destroyed the Romanian economy and uprooted farmers from lands they had occupied for generations. Eventually, even inner-circle members of his party got pissed off with him, including his eventual successor Ion Iliescu, who favored Perestroika-style reforms. Open rebellion started in Timișoara and soon spread to the capital, Bucharest.

In Ceauşescu's final public speech on the morning of December 21, 1989 he was stunned into silence when the crowd started booing and jeering. By the very next day the streets of Bucharest were taken over by the people. Ceauşescu ordered the Romanian Army to fire onto peaceful protesters, and the Romanian Army turned on him. Nicolae and Elena Ceauşescu escaped the capital by helicopter. Stupidly they had overloaded the helicopter with loot for starting new lives, and crashed into the Black Sea.

They were captured and shot dead on Christmas Day, 1989 after being convicted of genocide and plunder in a hasty show trial by the National Salvation Front (FSN). Before his execution, Ceauşescu proclaimed "We could have been shot without having this masquerade!". It is unknown whether Romanians have somehow integrated a celebration of the death of Ceauşescu into their Christmas festivities, but if they have, it's probably pretty bad ass.

However, due to Romania's current social problems such as poverty, political corruption, and a shrinking population (ironically caused by the ex-communist party politicians who overthrew Ceauşescu and are still politically influential today), as well as Ceauşescu's promotion of nationalism and independence from the USSR, a large number of Romanians today still reminisce about the good old days of Ceauşescu.[2]

Ceauşescu served as the model for Tim LaHaye's antichrist in the Left Behind series (he is named Nicolae Carpathia, a name roughly equivalent to someone in Alaska naming their kid Joe Denali, but whatever).

Ceauşescu's regime was known for some extremely restrictive policies on abortion; prior to his taking power, Romania had three to four abortions per live birth. Ceauşescu put the kibosh on this recklessness, banning abortion entirely, advocating vigorously for Catholic-sized families and imposing an almost self-parodically stupid enforcement regime whereby women in the workplace were regularly rounded up and given pregnancy tests by government agents referred to (where they couldn't hear) as the "menstrual police". Women without a threshold number of children who repeatedly failed to conceive were required to pay a steep "celibacy tax."

Sadly many of the extra births ended up being orphans, and many were infected with AIDS and other diseases transmitted from blood transfusions. It was the policy of the Ceauşescu regime to inject the inmates of state orphanages with blood purchased from donors in the cities. Most of the people who ended up selling their blood were prostitutes and drug users, and the blood was not screened for disease before being distributed to the orphanages. Ceauşescu was completely in denial of AIDS even existing, so the blood was not tested and no precautions were taken.