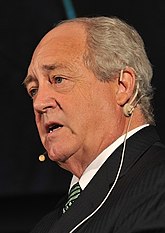 Moore giving a TEDx talk. (Note the x.)
Not to be confused with Sir Patrick Alfred Caldwell-Moore, the late TV astronomer.

Patrick Moore (1947–) is a former president of Greenpeace Canada, who left the organization because he disliked the "political direction" it was taking.

He's pro-nuclear power and pro-GMO,[1] but unfortunately an anthropogenic climate change denier who now specializes in helping corporations greenwash their operations. In 2010, he joined Asia Pulp & Paper, which has been accused by activist groups of widespread (and illegal) rainforest clearing.[2]

More than once, Moore has publicly declared that "There is no scientific proof that human emissions of carbon dioxide (CO2) are the dominant cause of the minor warming of the Earth's atmosphere over the past 100 years."[3][4]

He has declared that the US needs to increase its nuclear power production in order to reduce fossil fuel emissions, and cited this as one of his reasons for leaving Greenpeace.[5]

Which is odd, if he doesn't believe that fossil fuel emissions are responsible for global warming.

Since his departure from Greenpeace he and the organisation have engaged in a sometimes vicious war of words. A Greenpeace statement claimed that he turned his back on the organisation for money, calling him a "paid representative of corporate polluters" and saying he "exploits long-gone ties with Greenpeace to sell himself as a speaker and pro-corporate spokesperson, usually taking positions that Greenpeace opposes".[6] Moore openly admits that he is funded by the Nuclear Energy Institute via the Clean and Safe Energy Coalition.[5]

During a TV interview in 2014, Moore said of glyphosate, "You could drink a whole quart of it, and it won't hurt you." The interviewer then offered to actually bring him a glass of the stuff to drink on camera. Moore refused.[7] In the minds of the anti-glyphosate community, this was proof that the "glyphosate is safe" crowd was lying.

In reality, glyphosate is less toxic than table salt;[note 1] however, commercial glyphosate preparations typically include other additives, such as surfactants (think soap) to make the target plants more readily absorb the compound. These surfactants can be more toxic than the glyphosate itself. Also, just because it's safe to drink doesn't mean it tastes good.

Since the time of that infamous interview, others have gone on to drink glyphosate on camera.[10]