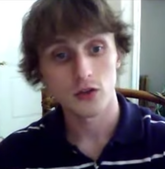 Ryan Faulk, also known as The Alternative Hypothesis or The Alt Hype or FringeElements or Stodles or The People's Veto, is an alt-right blogger and YouTube talker who supports white nationalism and race realism. He writes articles for TheAlternativeHypothesis.org with Sean Last, a Neo-Nazi who also wrote for The Right Stuff.[2] Despite holding far right political views, Faulk describes himself as "homosexual", "mildly autistic", and "1/16th Negro".[3]

Although describing himself as "alternative", Faulk's views on race are typical of the alt-right. On his website's "about" page, Faulk writes:[7]

The "alt-right" rose to prominence sometime between 2014 and 2016. While we did not start this website until 2016, both of us who run this site (Sean Last and Ryan Faulk) were writing about racial issues considerably before 2014. (Sean started in 2009 and Ryan started in 2007). We were doing this before the alt-right was a thing. That being said, we exist within the online community of people which has become the alt-right, we know many people who run notable alt-right sites, and our ideology exists within the alt-right if one has a "big tent" conception of the movement.

We do not advocate genocide, slavery, or any other kind of “supremacist” action. [...] On the other hand, we do endorse the factual statements, supported by a wealth of scientific evidence, that human populations differ in socially important ways for genetic reasons and that racial diversity does a great deal of societal harm. We also defend the prescriptive statement that White nations have just as much of a right as Asian or African nations to defend themselves from demographic displacement.

On his Twitter, Faulk retweets his support for white nationalist groups such as American Renaissance.[8]

Faulk also argues that racial equality is a "biological impossibility".[9]

In March 2017, Faulk was interviewed on Red Ice Creations for the show "In Defense of First World Policies & Genetics".[10]

Faulk argues for "race realism" (a euphemism for scientific racism) and asserts that his writings are "only 'racist' to the degree that facts and numbers are 'racist'";[7] however, his views are decidedly pseudoscientific. For example, the Alternative Hypothesis claims that races differ in brain size, measured by cranial capacity, attempts to link this to intelligence, and intentionally ignores counterarguments that socioeconomic factors affect brain development:[9]

The races also differ in brain size. This has been shown repeatedly, all over the world, dating back more than a century (Last, 2016). More recently, it has been shown that you can predict someone’s race by looking at the shape of their brain (Fann et al. 2015). Yet, it is supposed that, unlike the racial differences in virtually every other part of the body, these ones are due entirely to the environment. This is obviously a political move. Evolution doesn’t care that genetic differences in personality are politically controversial, it sees the brain as just another organ. If we evolved differences in all the others, we probably evolved differences in the brain too.

In August 2016, Faulk published an article titled "The Existence of Race" which argued precisely that.[11]

Faulk holds that the heritability of IQ within races in the US is 80% and that the same number holds for the black-white IQ gap. He bases this view on twin-studies, the parallel increase of within-race heritability and racial gaps with age and the correlation of subtest heritability with subtest racial gaps.[12]

Faulk has said a lot of weird and cringey shit, documented below:

Not sure what taking over Bohemia had to do with rebuilding Germany. Or his ultimate plan for war with the USSR. Hitler wasn't a WN.[16]

Also, "natsoc" is both cringey and vile. It's cringey b/c it's not a real thing, it's just larping. It's vile b/c Hitler was anti-slav.[17]