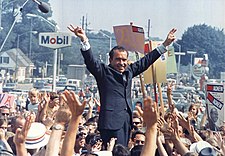 The Southern strategy was Richard Nixon's strategy to whiteify the electorate so Republicans could hold onto power in light of demographic changes. It began as a grab for southern states during the 1968 and 1972 elections: a combination of dog-whistle politics as well as a deliberately racist agenda, effectively throwing any social clout the GOP had right out the window.

It resulted in a total party realignment over issues of civil rights and racism. Democrats went from being the party who opposed civil rights to being the party that passed them,[2] and Southerners who were formerly Democrats voted Republican instead, because Republicans opposed progress in those areas to various extents. This was the most significant political realignment in the US since the "New Deal Coalition," and one that still continues to this day. 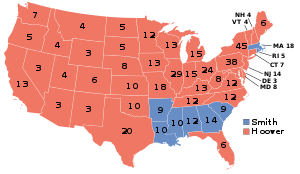 Pat Buchanan and Kevin Phillips, both Nixonites, have either released material or given interviews in which they made the southern strategy plain. Here's a 1971 Nixon administration memo with details. The highlights:

They even predicted in the memo that it would divide the country along north-south lines and eventually cause the media to turn against them.

Nixon's adoption of the strategy is often credited to two Southern Republicans, Harry Dent (a former aide to Strom Thurmond, perhaps the most iconic Dixiecrat to turn Republican over racial issues) and Fred LaRue (a Mississippi oil tycoon and future Watergate conspirator, otherwise known for accidentally shooting his father while hunting).[3] Dent in particular played a major role in securing Southern support for Nixon during the '68 campaign; he later wrote a memoir, The Prodigal South Turns to Power, in which he lovingly details the development of the Southern Strategy and his own role in it.[4] 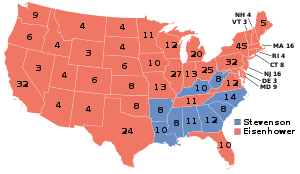 Lee Atwater, a political strategist for Ronald Reagan and George H.W. Bush, described the Southern Strategy in a 1981 interview:[5][6]

In 1936, Vance Muse, a Republican operative and racist anti-semite who also founded the modern "right to work" movement, organized with Georgia's brutal white supremacist Governor Eugene Talmadge a "Southern Committee to Uphold the Constitution,"Do You Believe That? funded by both Northern Republican-leaning industrialists like DuPont, Sun Oil and General Motors, and wealthy Confederates like Texan cotton broker Will Clayton,[7] so that they could exploit anti-New Deal and anti-FDR hatred in the South.[8][9] 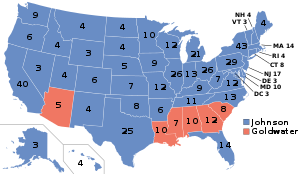 In 1964, Barry Goldwater accomplished a task that, until then, had been seen as physically impossible — he won five states in the Deep South for the Republican Party, which had been seen for the past hundred years as the party of Abraham Lincoln and the "War of Northern Aggression." Even more incredibly, those five states were, apart from Goldwater's home state of Arizona (which he only won by about 1%), the only states that he won in what was otherwise a Democratic landslide, turning established political battle lines on their heads. He was able to do this because of his voting record against anti-racism legislation versus the incumbent, Lyndon Johnson, who was in favor of civil rights. The South had, until that point, been a solidly Democratic voting bloc, often called the "Solid South." Nixon, taking note of this, campaigned on subtle states' rights themes in 1968 and 1972 in an attempt to keep the Deep South in the Republican column. It doesn't matter whether Goldwater or Nixon were actually racists or wanted racist outcomes (for the record they were — though not as rabidly or overtly as the voters they courted). All they wanted was racist votes, and Nixon campaigned on "states' rights" within the context of this issue so as to favor the legal outcome that the racists wanted, without having to actually be openly racist.

That Southerners could be persuaded to vote Republican in presidential races by the 1960s is attributable to the greater power of race than class by that time. For the first half of the 20th century, white Protestant voters in the South tended to be quite populist on economic issues, forming an important part of the New Deal Coalition and supporting government infrastructure projects like the Tennessee Valley Authority. However, they were rabidly reactionary on race and other social issues, often preventing Franklin D. Roosevelt and the northern liberal wing of the Democratic Party from taking action on lynching and segregation.

As the South grew in affluence after World War II, class tension began to fade. At the same time, the civil rights movement that began in the 1950s and gained momentum in the '60s put race into sharper perspective, while other cultural changes in the '60s (the sexual revolution, the counterculture, the New Left) also drove white religious conservatives in both the North and the South away from the Democrats. The latter in particular placed another once-solidly Democratic voting bloc, the working-class Catholic voters of the northern industrial cities, into play, something that Nixon and future Republicans would also take notice of. 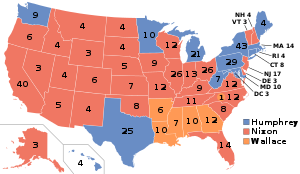 In 1968, this strategy failed to win over most of the South, although Nixon did win the election after carrying a few, but enough, southern states. The reason was Alabama's Democratic governor, George Wallace, running on a third party ticket — the American Independent Party, or AIP, which staunchly opposed civil rights and won over a lot of disaffected white Southerners who still couldn't bring themselves to vote for "the party of Lincoln."[18] Wallace won five Southern states in 1968, then returned to the Democratic Party and sought their nomination unsuccessfully in 1972 and '76, while the AIP became an increasingly fringy hangout for John Birchers and washed-up segregationists in subsequent presidential elections. 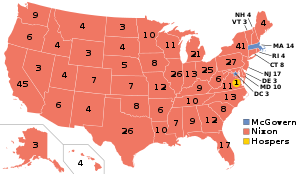 With the AIP nomination of Schmitz, any hope conservatives had of the AIP as a viable electoral vehicle in the South faded, and Nixon played his Southern strategy well in 1972, sweeping all of Jesusland and most of the rest of the country. Among the bones Nixon threw out to the South was his nomination of two anti-civil rights judges to the Supreme Court, George Harrold Carswell and Clement Haynesworth. Neither of them won confirmation by the Senate; Carswell was later busted in a public restroom soliciting an undercover policeman for sex. The more things change...

Tricky Dick also played to ignorant rubes in northern cities, such as the (at the time) thuggish AFL-CIO trade union leadership who had organized pro-Vietnam War riots in the wake of the Kent State shootings, and popularized "Silent Majority" as a neologism — which included playing the racism card in the south and the patriotism card in the north. Both the formerly-solid South and longtime union/Democratic strongholds in the Rust Belt went heavily for Nixon. Since that time, the conservative movement's strategy has been to use the Republican Party as their electoral vehicle. 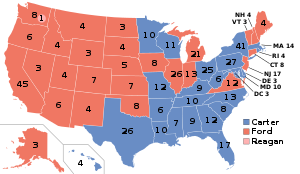 1976 presidential election: Carter vs Ford. Note how Virginia is the only state to vote Republican this election.

Nixon, of course, was pwned in 1974 by Chuck Colson and G. Gordon Liddy and turned the reins over to Gerald Ford. The Democratic nomination of the Governor of Georgia, Jimmy Carter, running as the anti-Watergate candidate, temporarily halted the Southern strategy, as Carter won every Southern state except for Virginia. Carter might well have won Virginia too if not for those spoilers, the Socialist Workers Party, the Libertarian Party, and Lyndon LaRouche's U.S. Labor Party. Drat you Ralph Nader!

As the 1968 and 1976 elections showed, the South was still reluctant to move into the Republican column, especially if a Southerner was on the Democratic ticket. However, the conservative movement had gotten fully behind Ronald Reagan, who gave the incumbent Ford a strong challenge for the Republican nomination, and the Southern strategy was resurrected during the late 1970s in a more organized form involving the rise of the Religious Right and groups like the Moral Majority, all intended to change the political landscape in the South for good. Part of this strategy also involved wooing ultraconservative Southern Democratic politicians to switch parties, and some did.

In 1980, Reagan launched his campaign in Philadelphia, Mississippi, a highly symbolic move showing the Southern strategy was alive and well.[19] Philadelphia is the town infamous for the murder of three civil rights workers by the Ku Klux Klan in 1964. There really was no other reason at all for Reagan to launch his campaign there or even visit the area. Philadelphia was a backwater rural part of Mississippi, a state which possessed only seven electoral votes.[16] Throughout his speech, Reagan never once mentioned those three murdered civil rights advocates.

The Reagan campaign also repeatedly used racially coded language during its quest for the White House. Historian Dan Carter noted that "Reagan showed that he could use coded language with the best of them, lambasting welfare queens, busing, and affirmative action as the need arose".[20]

Reagan won with a combination of the Southern strategy and figuring out how to get the working poor angry at the welfare poor and vote Republican. From that point onward the GOP's pro-Southern transition would be known as the "Age of Reagan" or the "Reagan era." 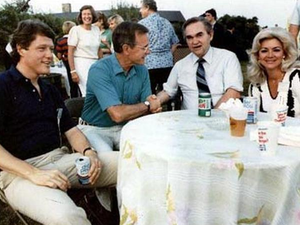 While the Southern United States has been viewed since 1980 as the most solid Republican voting bloc, recent elections have shown a number of cracks starting to develop in this strategy. Bill Clinton won much of the South (although mostly the border states rather than the Deep South) in 1992 and 1996, and Barack Obama carried Virginia and Florida in 2008 and 2012. North Carolina, too, also went for Obama in '08, and while it went for Mitt Romney in 2012, it was by a margin of just two points. Joe Biden carried Georgia in 2020, as well as Virginia which by that point was a solid blue state. Due to Sun Belt migration patterns, some political observers are predicting a split in the South as a unified political bloc, with the eastern Atlantic states (most notably the ones Obama carried in 2008, along with the Atlanta area in Georgia) becoming liberal and Democratic-leaning and the Deep South remaining a conservative stronghold. Interestingly enough, Texas, which is a deep red state by most metrics and contains a few of the biggest "red cities" (i.e. major cities where Republicans have a chance or are favored to win local state and national elections, a rarity given demographics of most cities), would be a blue state if its demographic groups (most notably Latinos) were to vote the same way they vote in other states like California.[citation needed] Of course the Republican party is aware of this possibility and has passed a number of voter suppression "anti-voter fraud laws" in the state.[citation needed]

That part of the strategy was pretty genius. The Republican Party apparently realized that they could dump a bunch of money into state elections, and from there rig the Congressional districts to their favor. Then, with the Congress in perpetual gridlock, the power to pass effective laws falls to the state governments that Republicans happen to mostly control. Icing on the cake: they can then blame all their state's problems on the White House.