From RationalWiki
(Redirected from Steven Colbert)
Jump to: navigation, search

Stephen Colbert (1964–) is an American comedian, TV presenter, actor, producer author and political commentator. Formerly a "correspondent" for The Daily Show, he was the host of a satirical current-affairs show on Comedy Central called The Colbert Report. His show directly followed Stewart's (and often used to overlap it slightly), rounding out Comedy Central's late night "fake news hour."

The Colbert Report was a deadpan parody of Fox News shows, most especially that of Bill "Papa Bear" O'Reilly. Colbert played the part of a partisan, airheaded pundit with a firm belief in the American Dream and a strong disdain for logic and reality.

In September 2015, Colbert replaced David Letterman as host of the Late Show. He brought over the Colbert Report's core staff but not his old persona, [3][4] only reprising it for occasional bits such as a farewell to Bill O'Reilly.[5] 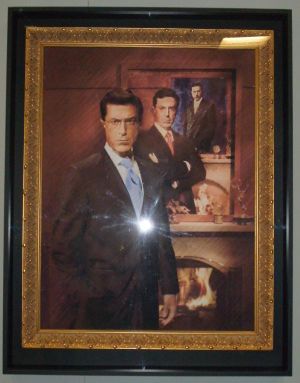