From RationalWiki
Jump to: navigation, search
Archives for this talk page: <1>, (new)

Look on Wikimedia Commons. Anything there can be inline-linked here. Or take out an account and upload your own, you lazy bastard. Peace. AgingHippie (talk) 18:13, 22 July 2015 (UTC)

Sometimes your sig really contradicts the tone of your posts. ikanreed You probably didn't deserve that 18:28, 22 July 2015 (UTC)

Sometimes yes, but often the answers are really easy to find. Also, you take things really seriously. Do they not have "jokes" where you come from? Peace. AgingHippie (talk) 20:56, 22 July 2015 (UTC)

Look at these images[edit]

Say what you want about the Kaiser's soldiers, but they sure had a sense of style... 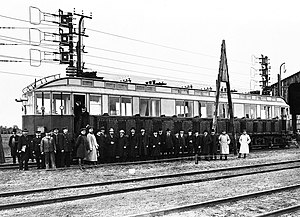 Awww, how cute. Alphas wouldn't need to do this weak chickenshit anonymous aggressive posturing to validate their self worth even if they had the time from their exciting lives.  :-) -EmeraldCityWanderer (talk) 17:05, 21 February 2016 (UTC)

I have an idea. A nationwide HSR network connecting core-based statistical areas (but especially major cities) could be built to help deal with the issues of air travel. -Bigljbigl (talk/stalk) 12:05, 20 July 2017 (UTC)

And who would pay for that?

@Bigs First of all, a national high-speed rail network for the U.S. is impractical. High-speed rail can only compete with air travel for distances of 400 miles (640 km) or less. Only hard-core train enthusiasts would take a high-speed train from Los Angeles to New York City, if it even gets built, which is highly unlikely. It makes more sense to build regional networks, for example, in the Midwest with Chicago as a hub. Nerd (talk) 04:49, 15 February 2019 (UTC)

@Bigs No worries. We all make mistakes. If you are still interested in this topic, please check out the article, new and improved! Nerd (talk) 04:58, 15 February 2019 (UTC)

this page is still wank[edit]

aside from the very american centric and pretty weak arguments for HSR (which is odd because im sure hsr would be a boon to the US - this section botches it), the insistence than any all arguments against it is by nature 'wingnut' is just bullshit. i dont believe any tried to list legitimate arguments against. i might try to have a stab at making the arguments section less wank, but it would involve deleting the lot and starting from scratch and i'm not sure its worth the drama. AMassiveGay (talk) 18:35, 19 March 2018 (UTC)

Does this site have a deletion request without prejudice (i.e. deleting an article without ruling out to write a new one with the same name)?--Klaksozavr (talk) 21:48, 19 March 2018 (UTC)

Yes, or you could just rewrite it section by section without having to go through the AfD business. WilderBicycle 22:08, 19 March 2018 (UTC)

Hi, @AMassiveGay, @Klaksozavr, and @Readymade! I do have plans to improve this article and that for Amtrak. Unfortunately, I'm a little short on time right now so I have not done much. I am the one who put up the "outdated" sign. If you guys have time, I suggest moving the US-centric bits to Amtrak, where they belong.
@AMassiveGay High-speed rails would indeed provide an economic boon to the U.S. and various projects have already been proposed (e.g. Chicago Hub), gone ahead (California High-speed Rail and Texas Central Railway) or even completed (Florida Brightline). The Northeastern Corridor will get a new and faster high-speed train, the Avelia Liberty. Nerd (talk) 00:58, 20 March 2018 (UTC)

Earlier editors keep claiming that high-speed rail has been decongesting airports. However, if you take a look at the passenger traffic of some of the worlds busiest airports

In a recent update, I pointed out that high-speed rail in France is not competitive with other modes of transport due to its price. Would not be surprised if this was in the case in other countries as well. (I recently talked to someone who just came back from a vacation in Europe. That person flew everywhere because trains were more expensive. This is, however, anecdotal and so will not be used as a source.) Nerd (talk) 16:39, 4 October 2018 (UTC)