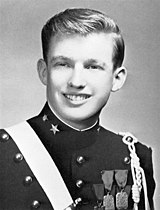 Donald John "They're Not People, They're Animals" Trump, Sr. (1946–) is the forty-fifth President of the United States, and only the third president in the country's history to be impeached by the House of Representatives, having received more votes against him than any president before him. He's also known as the "Chosen One and the King of Israel", a bizarrely unsuccessful American businessman, brash television personality, (un)intentional comedian, neo-Nazi sympathizer, honorary Russian Cossack, heel

and personality-cult leader who governs as a thug and an aspiring strongman, Nobel Peace Prize nominee, and current false-equivalency.

On December 18, 2019, Trump became just the third President in United States history to be impeached due to a coordinated campaign within his administration to pressure Ukraine for dirt on his potential political rival, Joe Biden, in the 2020 U.S. Presidential Election.