Saving this version for posterity

Can someone please add photo credit to this template, maybe on the bottom? It is required by the license and I lack design foo to figure out how best to integrate it. Tmtoulouse (talk) 00:34, 30 January 2013 (UTC)

I credit it with being hideous. What's with his wonk eye? Firing up photoshop...

The file is a good quality svg. Why is it rendering poorly in whatever MW shits it out as?

The actual photograph itself probably doesn't resize well because it's not a vector drawing. (It's embedded in the svg.) I have no idea how that renders. sterilesporadic heavy hitter 01:16, 30 January 2013 (UTC)
When I copied and pasted after ungrouping and uncropping in Inkscape it came up as a png. sterilesporadic heavy hitter 01:23, 30 January 2013 (UTC)

Sterile and I fussed with this in Illustrator and it appears to be an undocumented technical problem. The file is an SVG with an embedded ... something. It renders fine on its own, but blows up on whatever MediaWiki uses to render rasterized images. I converted the embedded image to ai vector but it saves as a 4mb svg 1.1. I could simply create a png of the thing and be done with it but the portal icons really are pretty slick as svgs. Not sure it particularly matters are this size, but I'd appreciate even a single relevant comment before I replace Ray's face with a vector banana.

A vector banana with the moustache, surely.

Bump, we have a legal obligation to either credit the photo or change it. I will bludgeon something in if need be but rather have someone with design sense work it out. Tmtoulouse (talk) 18:08, 31 January 2013 (UTC) 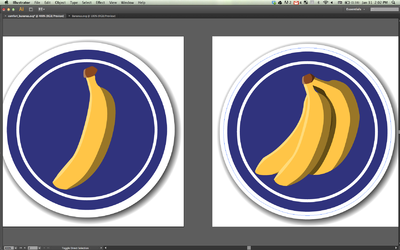 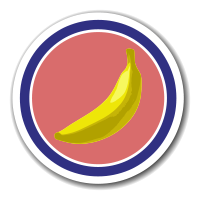 Nice icons, Nutty! I think the single banana one is more appropriate, since Comfort's banana lecture used one banana, rather than a bunch. That said, I prefer Sterile's rendition, as it would add a touch of color (salmon) to an otherwise all-blue navbar.

It is done. I wish I could draw a convincing mustache but after spending all this time learning Objective C I will vomit if I see another.

The current photo appears to be a no-go, so I started looking for potential replacements. I've only found two that use amenable licenses: the picture Wikipedia itself uses (public domain), and one on Flickr (CC BY-NC-SA 2.0). (I'll add that I know nothing about photo editing, so I don't know if either of them can be rendered in a format appropriate for an svg icon.)

I have a suspicion that any pixelated image is going to be a problem. The best you probably get can is to get an image the right size, as it might help. We have used other formats for the navboxes, although inevitably someone changes them to svg. This'll just have to be an exception. sterilesporadic heavy hitter 11:29, 30 January 2013 (UTC)

Yes, rendering a passable quality svg 1.1 is no problem in Illustrator CS6, but the files are enormous, which sort of defeats the purpose of a vector. We either get something appropriate like a vector crocoduck or banana or good god why do we even have a Ray Comfort portal when a lot of this material is of wretched quality.

And redirect to {{creationnav}}. We don't have templates for every individual stupid creationist. Herr FüzzyCätPötätö (talk/stalk) 20:58, 16 July 2015 (UTC)

It is done. The old template looked like this: