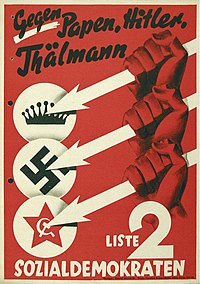 Three Arrows is a progressive, anti-fascist and social democratic YouTube channel run by some guy named "Daniel", aka Dan Arrows.[1] He focuses on debunking inaccurate right-wing/anti-SJW/neoreactionary talking points about historical and current events, especially Holocaust denial and other bogus claims about Nazi Germany, fascism, and other general misconceptions about Germany.[2]

The channel's name is a reference to the Iron Front of the Social Democratic Party of Germany (SPD), an anti-fascist paramilitary group which existed during Weimar Germany and that opposed Nazism, conservatism/monarchism and Communism. Later on, the symbol became widely used by anti-fascist groups overall (despite the symbol originally being unique to Social Democrats and being clearly opposed to the far-left).[3] His channel is similar to that of Shaun, "but with a greater focus on debunking bad history, and a sense of humor just as dry."[4]

Selected video: Was Hitler a socialist?[edit]

This article is a stub.
You can help RationalWiki by expanding it.
Retrieved from "https://rationalwiki.org/w/index.php?title=Three_Arrows&oldid=2198867"
Categories: